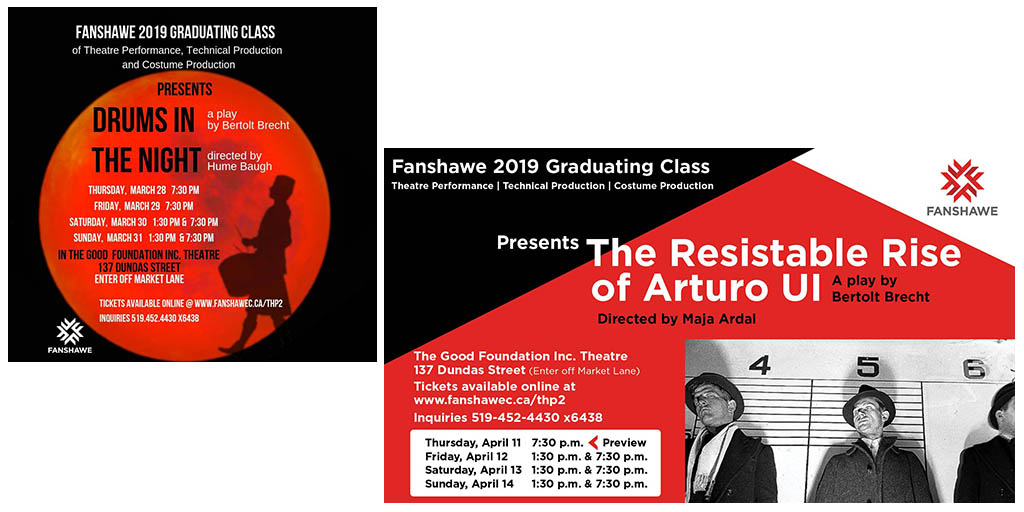 CREDIT: FACEBOOK.COM/SDPA AND FACEBOOK.COM/EVENTS
Students in the Fanshawe theatre arts-performance will be holding two plays this spring, both written by Bertolt Brecht.

The Fanshawe theatre arts-performance program will be holding two plays this spring.

Students in the program will be performing Drums in the Night and The Resistible Rise of Arturo Ui both written by Bertolt Brecht.

Karen Harley, co-ordinator of theatre arts and technical costume studies at Fanshawe’s school of digital and performing arts spoke with the Interrobang about the two plays that Fanshawe will be running.

According to Harley, Drums in the Night revolves around a woman named Anna Balicke whose lover Andreas left to fight in World War I.

“The war is now over but Anna and her family have not heard from him [Andreas] for four years,” Harley said. “Anna’s parents try to convince her that he is dead and that she should forget him and marry a wealthy war materials manufacturer, Murk.”

Harley went on with the synopsis and said that Anna agreed to the arrangement, but Andreas returns after having spent the missing years as a prisoner-of-war in Africa.

“The play dramatizes many of the grievances of the Spartacists in their uprising,” Harley said. “The soldiers returning from the front felt that they had been fighting for nothing and that what they had before they left had been stolen.”

The Resistible Rise of Arturo Ui, also written by Brecht, will be running on three nights in April.

According to Harley, Arturo Ui is a “renowned criminal, but the media have lost interest in him and people have stopped talking about him”.

“Meanwhile, Dogsborough, a senior cabinet minister, is getting a little too cozy with the grocery industry,” Harley said. “But rather than going towards infrastructure, government grants appear to be lining the pockets of Dogsborough and a select few shareholders.”

Harley said that Ui then insinuates himself into Dogsborough’s political institutions and brings his criminal background with him.

“To improve public perception, he trains himself to walk, sit and speak differently,” Harley said. “Soon, he has the whole city at his feet. When he’s done there, the whole world.”

According to Harley, students have been working on the plays since the first week of classes and the acting company began rehearsals in week five and seven.

“Young people should experience as much art as they possibly can to exercise their imagination if only for a short time while they are watching the play through their own eyes and experiences,” Harley said.

Harley said that students are involved in a variety of aspects of the play including making the set and props and being present for rehearsals and performances.

“It gives them another way to look at a period of time in history. Often plays are an expression of what is happening now but using a play to express it,” Harley said.

Tickets are on sale for $15 and can be purchased in advance at fanshawec.ca, or at each play’s Facebook page.
Fanshawe students Theatre Theatre Arts - Performance