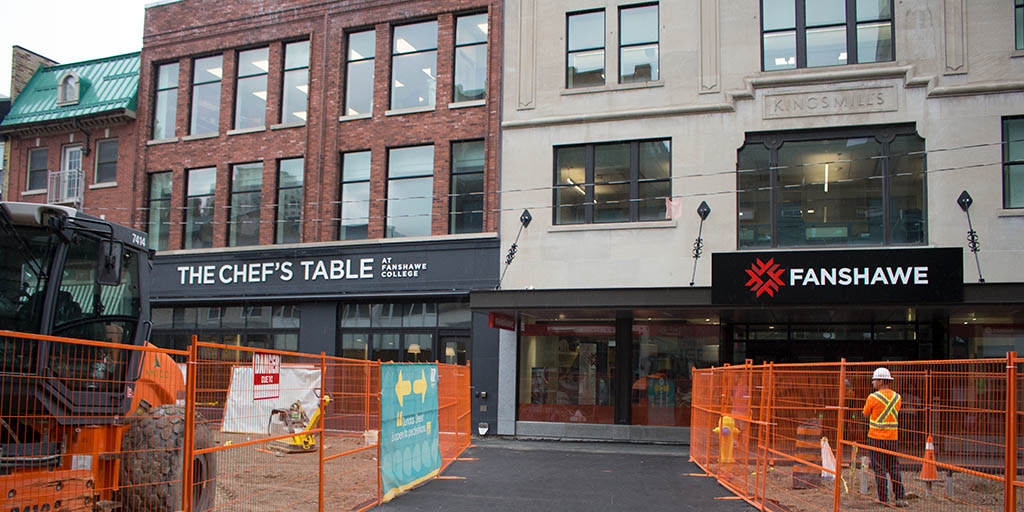 CREDIT: ANGELA MCINNES
Interrobang went to see if the increase in students around downtown is helping economical growth during this construction period.

As many know, the London downtown area of Richmond and Dundas has been a construction zone since early summer of this year.

The new flex street will give an opportunity for the stores in the area to have more foot traffic flowing in with the increase of space and freedom for pedestrians to hop in and check out the wares in the area.

Until then though, many have had to endure the long hours of loud machinery, walkways being rerouted throughout the day, and having to find the most accessible entrances around the construction zone.

It sounds complicated and some storeowners in the area agree it can be.

Now with the new campus downtown, how do a thousand plus extra students contribute to the struggling economy during the construction? When asked this question, store employees of the area had varying and similar views on the situation.

Jeremy Collison, manager of Dundas Discs, a store selling video games and movies, said that he has “seen a few new faces”, since the campus opened in the fall, but that business has seen the same decline in sales as it has been during the construction period.

Collison said that he thinks that it will definitely improve once the construction ends, though he did mention the new faces popping in tend to get wowed by the large selection of games and videos in it.

Owner of Ubër Cool Stuff, Kayla Gibbens, said that there had been an increase of students, but that she was unsure if students have been an added revenue for the store.

“It’s hard to predict where our sales are coming from. From what I’ve seen not a ton of students are buying a lot. I did get in the coupon book though for Fanshawe and those have been coming in, but it’s little bits here and there. It always helps out,” Gibbens said.

On the other side of the spectrum, some stores have been seeing an increase in student interest in purchasing items from their stores.

One employee, Yvonne Anderson, from Value Store, which is situated right next door to the new campus, said that she has seen an increase of student interest in the wares of the store. She said that she has actually had quite a number of theatrical students coming in to see the old wares they carry as inspiration for props or just buying these items to repurpose for props too.

Christopher Runciman, store manager at Heroes Comics said that they have seen students coming in for their artist needs.

“As far as it goes for graphic design students located there, that’s great. We carry a number of art and design books and insightful books looking into the creative process of how to begin making comics. That’s something additional that people can investigate here. By having the ability to facilitate that for people in our shop, I think it stirs up some interest,” Runciman said.

Fanshawe’s chair of the school of tourism, hospitality and culinary arts, James Smith, said that he has definitely seen students exploring and shopping in the downtown area.

“Students are going to the Starbucks and going to the McDonalds and Tim Hortons. They’re eating at different restaurants at the Nest. They are going there, not a ton, but I think they are going there. Financially, it’s definitely impacting downtown. I think once the street opens, it will become even more open and more acceptable for students,” Smith said.

The consensus seems so far that when construction ends, more students will be able to access the stores that are currently hard to get to due to the long roundabouts around construction, and that these stores are expecting more business when it does happen.
Downtown London Dundas Place Fanshawe Downtown Campus Fanshawe students Flex Street

eSports could be Fanshawe's next varsity sport