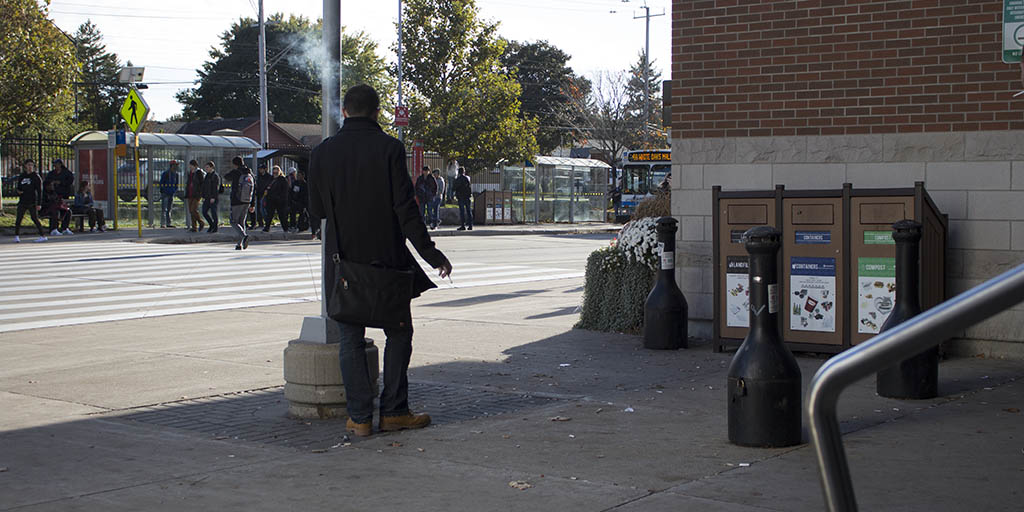 As of Nov.1, anyone wanting to consume tobacco products, as well as marijuana, will have to step off campus property.


Fanshawe College has announced it will make its campuses entirely smoke-free as of Nov. 1, 2018.

Anyone wishing to consume tobacco or marijuana will have to go outside campus property to do so, with an accommodation for the medical use of cannabis and Indigenous ceremonial smoking.

News of this decision came in a mass email to students and staff on Oct.16, one day before the Canada- wide legalization of marijuana.

According to the email, signed off by Fanshawe President Peter Devlin, smoking any form of tobacco and/or cannabis, vaping and the use of e-cigarettes and smokeless tobacco (chewing tobacco) will not be permitted on Fanshawe property.

“Entry to the College or involvement in any College activity in a state of intoxication or while under the influence of any substance is prohibited. Students should be aware of the physical and mental effects substance use can have on your health,” the email said.

In Ontario, it is currently illegal to smoke marijuana in public spaces under the Cannabis Act. However, the Ford government introduced Bill 36, the Cannabis Statute Law Amendment Act, in late September.

If passed, the legislation would amend the current act to generally allow for the consumption of recreational cannabis wherever tobacco and e-cigarettes are currently allowed. Dave Schwartz, Fanshawe’s executive director of Reputation and Brand management, said that the new policy has been a year in the making.

“Our plan all along was to be a smoke-free campus by 2019. The legislation that was introduced two weeks ago, Bill 36, really escalated that decision, so that we decided to go for Nov. 1,” Schwartz said.

Schwartz said that banning smoking was a part of a plan to prioritize the health of students, staff and faculty.

“We realize that there will be a small population that will be upset but the majority of people have expressed not only relief but almost a happiness that we are going smoke-free for the overall health of the campus,” said Schwartz.

Schwartz said that students unwilling to walk to the outside of campus can consider using nicotine patches or gums, and to ensure that they have a buddy should they choose to make the trek.

Fanshawe will be taking an educational approach to enforcing the policy for several months after it takes effect.

“There will be no fines or ticketing. Because this is a transition, we want to be fair to everybody,” Schwartz said, adding that the code of conduct and policy C206 will detail the penalties for those who break the policy.

Schwartz added that there is a working group in counseling and accessibility looking at ways to provide additional supports for students who are concerned about the policy adjustment.

But some students told Interrobang that they worry the transition will be anything but smooth.

“A lot of people are really struggling and really suffering especially because we are in midterm season. Not being able to smoke a cigarette on campus is going to be detrimental because it’s so stressful. It makes you feel very uncomfortable and to have that added stress if you can’t smoke a cigarette, especially for people who smoke a pack a day, is going to make it hard for them to get through their days,” Elizabeth Grant, a student in early childhood education, said.

Grant added that she felt the smoke-free policy may impact future students’ decisions to come to Fanshawe.

Grant’s classmate, Gabrielle Speilmacher, said she worried for the safety of students having to leave campus.

“I don’t think it’s safe,” Speilmacher said. “I lived in Kestrel last year and I was even afraid to go about 10 feet away from my house within the town house area to have a cigarette.”

Ethan Eichler, a television broadcasting student living in Merlin Residence, said he was skeptical students would leave campus to smoke despite the policy.

“I’m sure people are just going to do this stuff in their room and people are going to smoke it at the back,” Eichler said.

“This is just kind of a waste. I think it’s the stigma of weed in an educational setting. But if it’s legal, it’s legal. Just let us smoke it,” he said.

With the legalization of marijuana in effect, individuals 19 years and older can carry up to 30 grams of marijuana and keep them in residences, along with bongs and other smoking accessories.

Carolyn Mitchell, assistant director at Falcon House, said that residents should be mindful that in spite of the national legalization, they still can’t put their smoking accessories on display in windows, and that underage possession or indoor smoking of any kind will be penalized.

The College is one of more than 30 post-secondary institutions across Canada that have already become smoke-free.

According to the University of Western Ontario website, the number of designated smoking areas on their campus were reduced to six on July 1 and the University will go completely smoke-free by July 1, 2019.