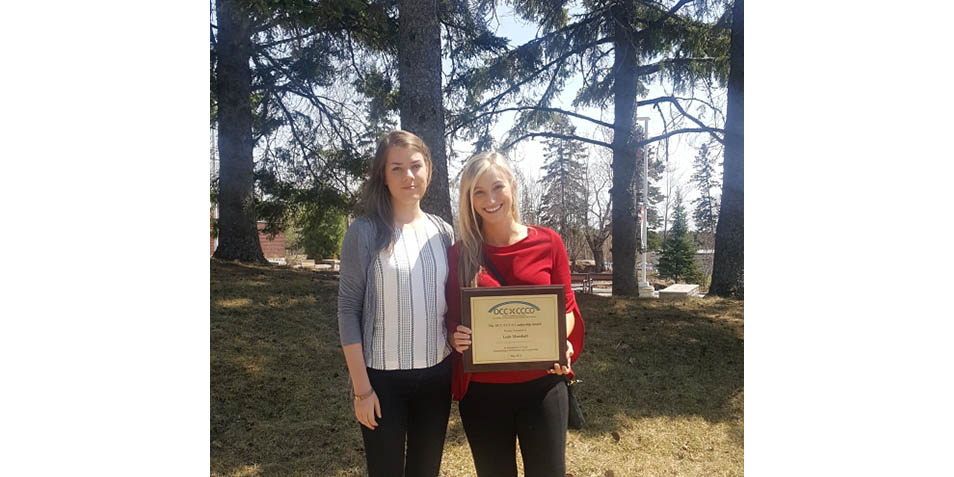 CREDIT: PROVIDED BY LEAH MARSHALL
Fanshawe's sexual violence prevention advisor, Leah Marshall (right) won a leadership award for the work she does in counselling and helping students who have experienced sexual violence and/or gender-based violence.

This award was presented to her in honour of her contributions in counselling within the Ontario community college system.

“It was a big surprise to hear that I had not only been nominated, but had been selected for the leadership award for the Ontario College Counsellors this year,” Marshall said. “It's an honour to have your colleagues recognize your work.”

Marshall was appointed her role as sexual violence prevention advisor by Fanshawe College in response to the Ontario government's action plan to “end sexual violence and harassment in Ontario”.

According to Marshall, this position was created to “specifically support students who had experienced sexual violence [and/or] gender- based violence”.

Since taking on this role, she runs two separate initiatives a month, that bring awareness to preventing sexual violence and supports survivors.

Events Marshall organises includes Sex, Drugs and Rocky Road: an interactive carnival held at The Out Back Shack to educate students about consent, pleasure, and hard reduction. There, they partnered with the London-Middlesex Health Unit to provide STI testing and free, anonymous HIV testing.

Marshall tries to collaborate with different departments in the college to create educational and prevention initiatives because she believes that “not all students receive messages in the same place, so to have the message college-wide, students will know that they are supported”.

Some of the work Marshall has done, has involved the Fanshawe Student Union (FSU), Fanshawe's First Nations Centre, Spectrum Club, residents and athletics.

Marshall partnered with the First Nations Centre and brought the REDress Project to Fanshawe College as a means of raising awareness for the 1,200 missing and murdered First Nations women in Canada. There, students painted on canvases which were combined to make an image of a First Nations woman.

Earlier this year, Fanshawe brought the Faceless Dolls Project to London. There, over 600 dolls were created by students at the London, Simcoe, Woodstock, and St. Thomas campuses. They were displayed at the Siskinds Gallery in February.

Marshall believes that “the initiatives span and address the intersectionality of our work and the importance of recognizing that there are multiple layers of oppression”.

According to Marshall, these workshops and events were all started to “break up some of the barriers that make it difficult for people to reach out for support”.

Marshall iterated that “the worst thing is feeling like you don't have any options”.

Marshall has created college- wide programs and workshops to make sure that victims can seek for help in a safe space.

“Sexual violence isn't about sex, it's about power and control,” Marshall said. Her role was created to “support survivors and ensuring that [victims] know their rights and options on campus”.

Marshall wanted to clear up the “misconception that sexual violence is only a physical act”. She believes that “sexual violence takes place in many spaces”.

According to Marshall, her work focuses on “making sure that students have control over their healing process”, and to “end rape culture and support survivors of sexual violence”.

Marshall believes that the award will not change the nature of her work, but was positive about receiving it.

“It's nice to be recognized for the work [I do],” Marshall said.