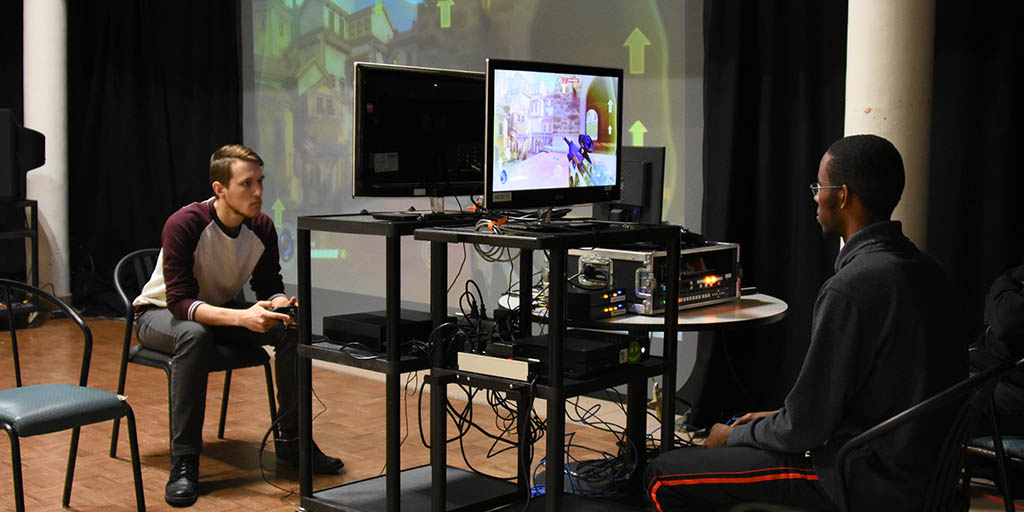 CREDIT: BROOK IDEN
The Fanshawe Ultimate eSports League (FUEL) concluded its first year of operation with championship tournaments for each game. The winners for each of the four games took home a $200 prize.

On April 16, the Fanshawe Ultimate eSports League (FUEL) hosted its first championships, with the top eight competitors for each game title competing in tournament brackets for a $200 prize.

The evening began with competitors duking it out in the quarterfinals for the game(s) they qualified for throughout the season. The games featured in the tournaments were Super Smash Bros. Melee, Rocket League (1v1), Overwatch (1v1 mystery duel) and FIFA 18. Numerous televisions were set up in Forwell Hall and a large projector screen showcasing highlight matches was set-up in the focal point of the area. In addition, the tournaments were broadcasted live on Twitch.tv and student casters provided commentary throughout the event.

During the quarterfinal rounds, there were a few upsets with various predicted winners being knocked out of the tournament. Throughout the semi-final rounds of the tournaments, students cheered on their peers and chatted amongst each other over some drinks. In the final round, the finalists for each game competed in absolute focus while their matches were broadcasted on Twitch.tv and the large projector screen in Forwell Hall.

The Overwatch finals were broadcasted first and Abdirhaman “BlackMagic” Moalin was the winner. When asked how he feels to be the FUEL Overwatch champion, Moalin said, “It feels amazing. The fact that I can gain something from having this kind of hobby is amazing.” Moalin explained that this was the first video game tournament he has won a cash prize in. He also said that the league helps bring the gaming community together and added that PC games would be a good addition to the league in the future.

Subsequently, Anthony “Toeknee” Sousa won the Rocket League finals and also secured himself a cash prize of $200. Sousa said he spent time practicing for the tournament and his hard work payed off. It was also his first time winning a video game tournament with a cash prize. When asked how the year went participating in FUEL, Sousa said, “I think it went pretty well. We had some people show up, maybe not so much for Rocket League, but enough competition that had a good skill level to play against. It’s been a lot of fun and I’m going [to FUEL events] as long as I’m in school here.”

Following the Rocket League finals, the two FIFA 18 finalists competed for the cash prize. Amal “Amal PS” Satsya was victorious. Like Moalin and Sousa, this was Satsya’s first time winning a video game tournament. “It’s awesome to be a part of this and I hope more is coming for FIFA [next school year],” Satsya said.

The last final of the night was Super Smash Bros. Melee, while Brandon Lemieux took home the $200 in the end. He explained that he has previously won other Super Smash Bros. tournaments and there is a growing scene in Canada for Super Smash Bros. games. “I think what Tyler [Hetherington] (the co-ordinator for FUEL and Fanshawe Student Union (FSU) events and activities co-ordinator), is doing is amazing. I think eSports are gigantic and they are just going to keep getting bigger and bigger,” Lemieux said. He further explained that it can be tough to start an eSports league because many individuals do not consider eSports to be a sport.

For more information regarding future plans for FUEL, check fsu.ca/fuel for updates.

Rock the Park Music Festival has something for everyone

Rock the Park Music Festival has something for everyone