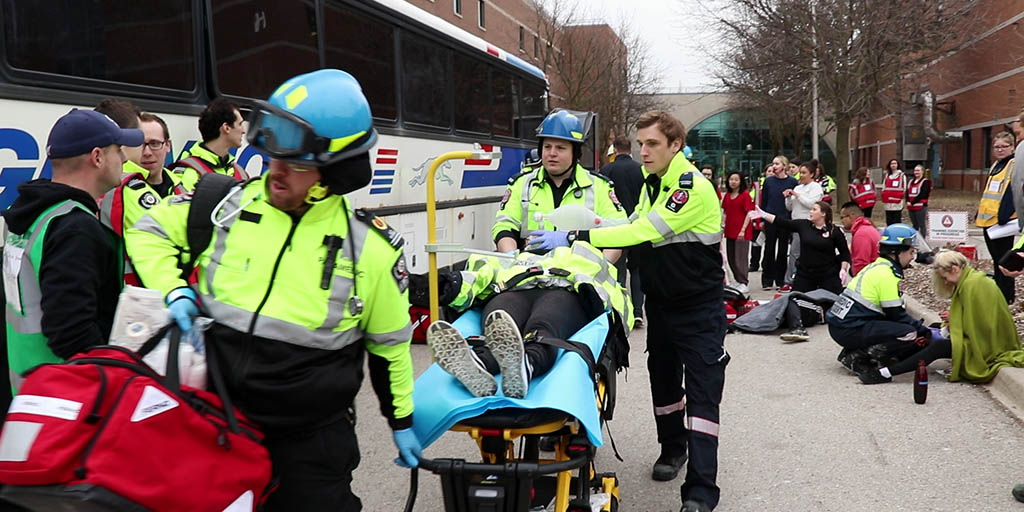 CREDIT: ALL PHOTOS COURTESY OF JORDAN CROW
Paramedic students had the opportunity to participate in mock disaster scenarios on campus on Friday, April 13

On April 13, students from the paramedic program at Fanshawe had the opportunity to participate in mock disaster scenarios to help prepare them for their future careers in the medical field. Throughout the day, the students participated as paramedics and mock victims in two Mass Casualty Incident (MCI) scenarios and 12 smaller scenarios that took place around the campus.

The first scenario took place behind the M Building near the greenhouse. The incident involved a group of people traveling from Windsor to Toronto via charter bus to attend a music festival. During the trip, some of the passengers started to drink alcohol, and as a result, a fight broke out, leaving various passengers badly injured. To make the scenario more immersive, the victims had make-up applied to them to create the illusion of blood and serious injuries. The bus was also coated in a mix of clam chowder and vinegar to emulate the smell and the appearance of vomit.

During the scenario, paramedics had to keep up frequent communication with their squad and think quickly about which wounded victims to tend to first. The mock victims acted out different roles to test the paramedics. For example, one individual was searching for her best friend while experiencing symptoms of shock. Others were pretending to be drunk while they distracted the paramedics.

Aaron Yuzik, the leader for the team of paramedics in the first MCI mock disaster, shared his thoughts on the exercise. “It was quite chaotic, but it was a brilliant exercise for us because these events don't happen often, [which is why] you have to be prepared and have to be organized.”

Yuzik explained that the paramedics were not graded on the exercise, but still received feedback for their performance and decision-making. Yuzik said that the students give themselves a personal grade as well, because if that sort of scenario were to occur for real, it is important to be as prepared as possible and in control of the situation.

After the first scenario, the paramedics had a debriefing regarding the disaster exercise and had the opportunity to reflect on what they could have improved on and what the team did well. Subsequently, all the volunteers and students involved in the mock disaster exercises had dinner in Forwell Hall. During the mock scenarios, volunteers wore jackets to distinguish their role in the scene such as media, scene control and observer.

The second mock MCI scenario of the day involved two drug dealers on a bus who were arguing over a suitcase, which opened up to reveal fake cocaine and carfentanil. This caused everyone on the bus to pretend to have a reaction to the drugs.

Dugg Steary, co-ordinator for the paramedic program at Fanshawe, shared some words on the students' performances in the mock disaster scenarios. “They have applied everything we taught them amazingly. It's been fantastic, they did a great job,”