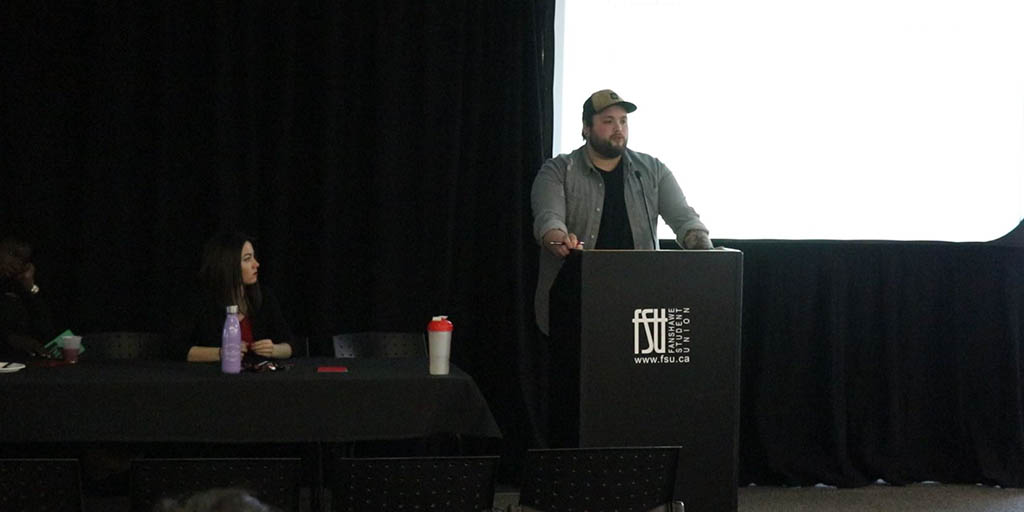 On April 10, the Fanshawe Student Union (FSU) held their Annual General Meeting in the Alumni Lounge. The meeting began with an address from the president of the FSU, Morganna Sampson. During her speech, Sampson spoke to the crowd regarding the College’s achievements and initiatives that took place throughout the year, as well as plans that are in the works for the future.

In the summer, members of the Fanshawe community painted a new rainbow crosswalk outside of the Student Wellness Centre to celebrate diversity, inclusivity and a safe space at the College. Regarding food options on campus, all of the menus from both The Out Back Shack and Oasis now include labels indicating gluten free and vegetarian options. Kettles + Curry, Booster Juice, Pablanos and Pickles were new FSU food outlets available at the College this year.

In addition, new student study and lounge spaces were added to the hallway that connects the Student Union Building to the Student Wellness Centre.

Regarding future plans for the College, a new cafeteria is scheduled to open in the Y Building sometime next school year. “Prior [to this announcement], the Y Building did not have a cafeteria or lounge space. The proposal for [the new project] holds about 102 students, which is fantastic,” Sampson said.

In addition, earlier this school year the College received a Vitality grant, which is now providing funding for mental health initiatives on campus. The grant of $240,000 is being dispersed over a three-year period. Through the grant, the College has hired an individual who is currently developing a new peer to peer service for the College.

Sampson’s address also covered the FSU’s annual charity fundraising campaign. This year’s selected charity was the Canadian Mental Health Association (CMHA). In total, the FSU has raised about $4,000 for the charity and will be raising more funds for the organization through their Glow Run and after party event. Some other initiatives that helped raise funds for CMHA included a BBQ during orientation festivities, a Zumba class, a smile campaign and more.

The students also approved the Student Administrative Council (SAC) 2018/2019 Honoraria of a maximum of $375 per semester for each director and an additional maximum of $150 for the chair of SAC.

Lastly, the students approved the CRO Report of the election results for FSU president and directors. This year’s election results concluded with two candidates tying for the eighth FSU director position. As a result, SAC made the decision to include nine directors instead of eight for the 2018/2019 term.