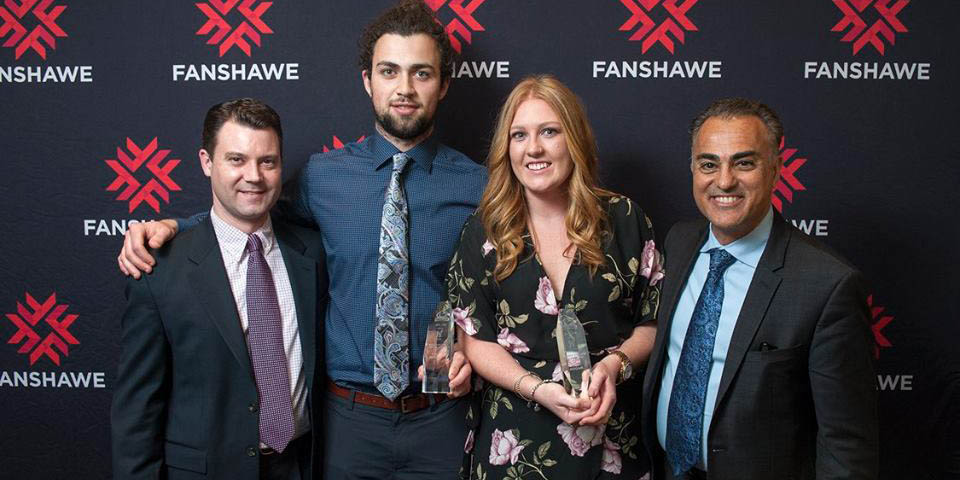 CREDIT: FANSHAWE ATHLETICS
The Falcons earned a record 20 medals from provincial and national competitions. Many students were also awarded during the College's annual athletic banquet.

The Fanshawe Falcons brought their A-game this varsity athletic season, claiming a total of 20 medals from provincial and national competitions.

“To get 20 medals combined nationally and provincially this year is an outstanding achievement and certainly they deserve all the credit. They put in all the time, work and effort, the coaches as well, and have done such an outstanding job representing our college,” Fanshawe’s manager of athletics, Nathan McFadden, said.

According to Fanshawe athletics, the previous record for the College regarding an overall season medal count was 17. In addition, the Falcons’ successful season place them in second for overall medal count in the Ontario Colleges Athletic Association (OCAA), with Humber College taking first place. George Brown College and Georgian College both tied for third place with six medals each, resulting in a huge gap in medal count between second and third place.

Various other Fanshawe athletic records were set this year, including the men’s volleyball team achieving an undefeated regular season, Ali Vlasman setting an all-time points record in women’s basketball and Fanshawe setting a personal record of claiming the most Canadian Collegiate Athletic Association (CCAA) medals in a season. “This year, we broke our record that we set last year for most medals won nationally. We won six this year compared to our previous record of five,” McFadden said.

Back in November, Fanshawe hosted the OCAA Cross-Country Provincial Championships at the Fanshawe Conservation Area. At the championships, both the men’s team and women’s team took home the gold medals with Jordan Kadlecik taking first place individually in the men’s race and Janelle Hanna taking first place individually in the women’s race. The OCCA Cross-Country Provincial Championship was the only OCCA/CCAA championships that the College hosted throughout the 2017/2018 athletic season.

To celebrate the success and accomplishments of Fanshawe sports teams this varsity season, Fanshawe athletics hosted a banquet on April 6. McFadden explained that the annual banquet took place at Oasis. “It’s something that gives us the opportunity to recognize all those individuals who played a part on their team over the course of the season. Also, to recognize the award winners [for each team, which includes] rookie of the year and MVP for each of those teams,” McFadden said. In addition, the major awards of the athletic year were also distributed throughout the evening of festivities such as the Mike Lindsay leadership Award and Male and Female Athlete of the Year Awards.

According to a Fanshawe athletic news release, Riley Hogan was the recipient of the Female Athlete of the Year Award. Hogan, who won bronze at the Badminton National Championships, became the first Falcon to claim a CCAA medal in the women’s singles category in the past 30 years. Volleyball athlete, Cole Jordan, was the recipient of the Male Athlete of the Year Award. According to Fanshawe athletics, Jordan became the first Fanshawe men’s volleyball player to be named the OCCA Player of the Year. Joran’s skill and teamwork contributed to the men’s volleyball team’s successful season, with the team finishing their regular season undefeated and claiming the silver medal at the National Championships.

Visit Fanshawe Falcons via Facebook to view more photos of the athletes.

Photos below are courtesy of Fanshawe Athletics.