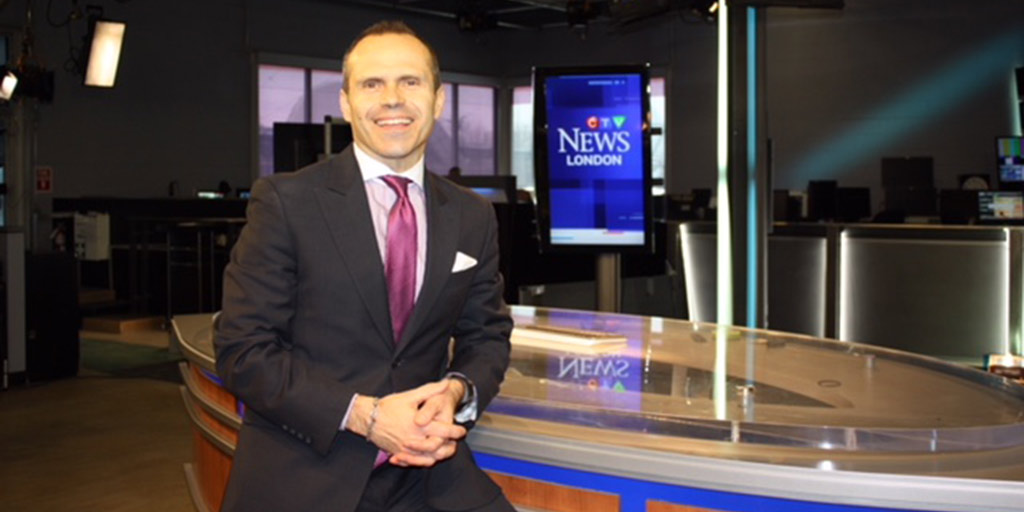 CREDIT: PROVIDED BY NICK PAPARELLA
Nick Paparella graduated from the Fanshawe broadcast journalism program in 1981. On Feb. 8, he will receive the Community Service Award at the College's Distinguished Alumni Awards.

CTV News reporter, Nick Paparella, received the Community Service Award at the Fanshawe Alumni Distinguished Alumni Awards’ Hall of Fame dinner on Feb. 8. Throughout his journalism career, Paparella has covered a wide variety of local and global events to help keep Londoners informed on the latest news. Some of Paparella’s stories include covering former U.S President Barack Obama’s inauguration, documenting the aftermath of the earthquake in Haiti, covering various murder trials in the city of London that have affected the community and many others.

Pararella said he found his passion for journalism in grade nine after watching a reporter from City (TV) having fun while covering the Canadian National Exhibition. During his time in high school, Paparella’s extroverted nature led him to take drama classes and he has never felt intimidated to be in front of an audience on stage or on camera. He also did the announcing for his high school’s football games. Paparella graduated from the broadcast journalism program at Fanshawe in 1981. A factor that drew him towards the program was the opportunity to have hands-on experience with radio broadcasting through 6X-FM, one of the only college licensed radio stations at the time. Reflecting on his time at Fanshawe, Paparella said one of the most memorable parts of taking the broadcast journalism program involved making long-lasting friendships with his fellow students. “When you were completing projects, you would be [at Fanshawe] almost night and day, so you become friends with a lot of the students that were with you [during these projects] and some of those friendships still remain today,” Paparella said.

Paparella explained that the business of journalism is changing. Due to the internet providing individuals with the ability to connect with one another almost instantaneously, people expect to receive the latest news immediately, rather than having to wait for the six o’clock or 11 o’clock news on television. As a result, he said it is important for journalists to be well versed in technology.

When Paparella first started his career as a journalist, instances would arise in which his team was sent out on a story past 4:30 p.m. As a result, the team would not have time for their story to make the six o’clock news. However, with the latest digital tools, he is able to record footage on his iPhone and send it back to the studio to be shown on air/online almost immediately. For example, Paparella was sent a year and a half ago to cover a fire at Hyde Park. Using his iPhone, he was able to email the footage to his boss and the footage was on CTV News in only five minutes.

Paparella provided some advice to current students in the broadcast journalism program. “Stick with it. Keep working hard. You will eventually find your way in various mediums. Journalism is still a great job and I still love doing it.”

Paparella said he is truly humbled by being the recipient of the Community Service Award and is always ready to lend a helping hand to the community, “Being kind and generous to everyone you meet is one of my mottos that I always tell my three sons and my wife lives by that motto every single day.”