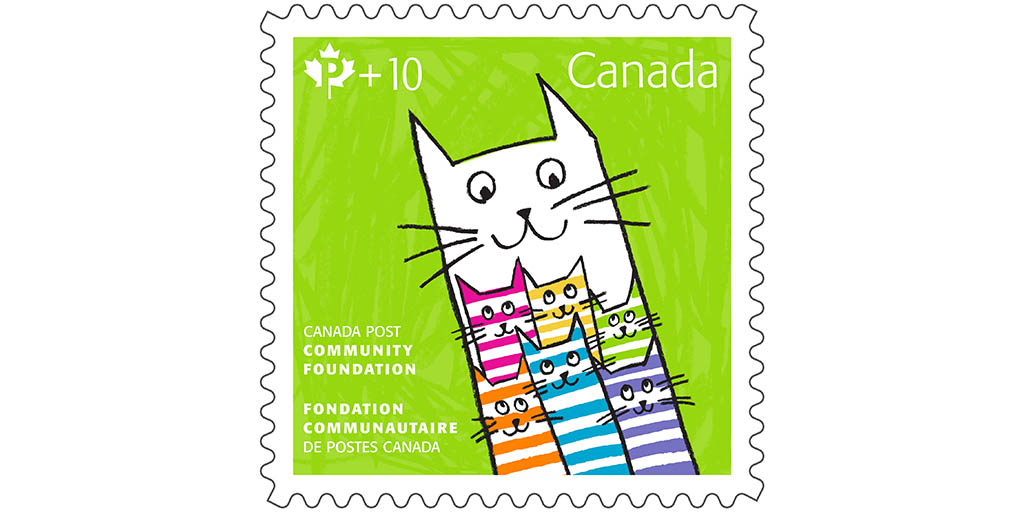 Credit: ANDREW LEWIS
The stamp commissioned by Andrew Lewis, helps raise funds for the Canada Post Community Foundation, which helps to improve the lives of children.

According to the Canada Post website, since the community foundation's launched five years ago, the organization has raised more than $6 million to go towards breakfast programs, sports programs, mental health initiatives, anti-bullying initiatives, building libraries and many more charitable causes.

Lewis chose to decorate the 2017 stamp with a mother cat smiling down at her kittens. “The mother cat represents us looking after the little kittens [the children]. I spent a lot of effort looking at each cat's expressions on the stamps, envelopes and booklets. They all have very individual characteristics, which took a long time to draw,” Lewis said.

Lewis said he is thrilled with the design and considers it a huge honour to be selected to design a stamp for Canada.

The 2017 Canada Post Community Foundation stamps are sold in booklets that come with 10 stamps in two colour variants (five per colour). The stamps retail for $8.50 with one dollar going towards initiatives to help improve the lives of children.

Lewis explained that creating a stamp has a long design process that spans from the initial concepts to the final product. “I work with some really talented people at Canada Post. We take a really long time to put all the components together,” Lewis said. “It's not just the stamp, of course, but there is also the booklet and the official firstday cover envelopes, which all the collectors try to get their hands on as well.” In addition, Lewis also explained that the printing process is more complex than usual and is executed with a lot of care.

Lewis was also commissioned to design the 2016 community foundation fundraising stamp. These stamps featured an eccentric and colourful avian design. The avian theme was chosen because the stamps offer children in need the opportunity to spread their wings in ways that would not be possible without the charitable donations. According to Cindy Daoust, the manager of community investment at Canada Post, the vibrant bird stamp raised around $72,000 for the foundation.

Daoust explained that the fundraising stamp initiative started in 2008, with the last six stamps supporting the foundation.

The 2017 Canada Post Community Foundation stamp was met with massive success upon its debut with collectors experiencing difficulties obtaining the first-day cover envelopes. “The cat stamp is proving to be very popular. I have great expectations for its success raising funds for the foundation,” Daoust said.

In regards to Lewis' other projects, the artist is working on designing a series of euro coins and a series of concert posters for Princeton University.

“I think it's important that we don't drop mail entirely. It's easy to go electronic but there is something charming about sending mail. It takes a little effort, but it's really cool to actually get a [physical] letter, especially when it is from another country. I think that's something that we can't forget about,” Lewis said.
Fundraiser