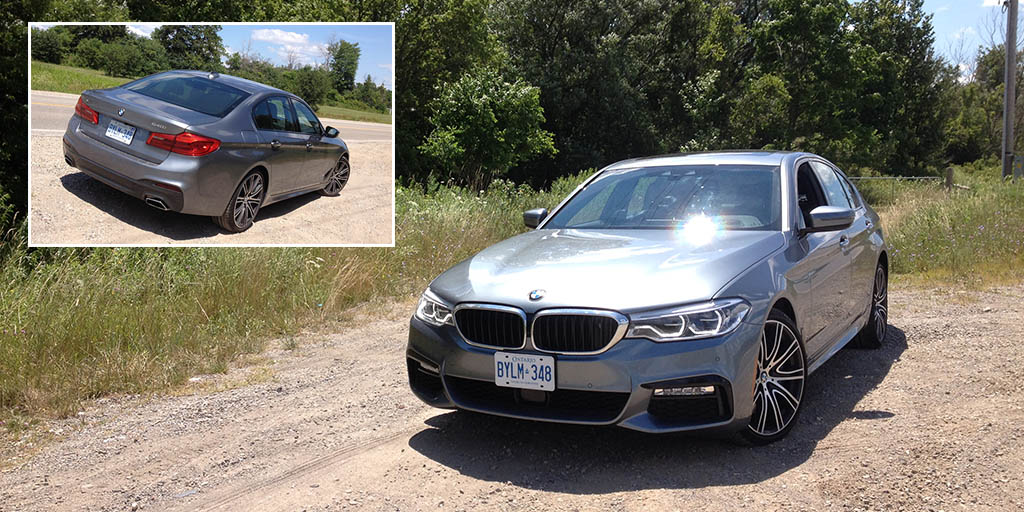 CREDIT: NAUMAN FAROOQ
The 2017 BMW 540i a sleek and luxury car that has a price tag to reflect all that it has to offer.

The BMW 5 series has been around since 1972. Now, in its seventh generation, this model keeps getting more technologically advanced and more luxurious.

Question is, is it still a sporty luxury offering, or has it lost some of its appeal in pursuit of total luxury?

From an aesthetics point of view, the new 5 series has lost its own identity.

In the past, a 5 series looked quite different from other BMW sedans and were instantly recognizable.

Now, with the latest model (also known as, G30), it looks very much like a slightly smaller 7 series. It really is hard to tell the two models apart, from a distance. Perhaps, that was done deliberately, so buyers of the new 5 series would link it to the company flagship model.

Just like the flagship 7 series, the new 5 series is a technological wonder car.

It has the kind of features that would have been the stuff of science fiction, not so long ago. Along with features like an adaptive cruise control with lane keep assist technology, which makes this a nearly autonomous car, it also features gesture control, so you can just twirl your hand in mid-air, while seated and it’ll increase or decrease the volume of the stereo. Gesture control currently only recognizes a few commands, but this technology is only going to get more and more clever, from this day forward.

However, its ‘pièce de résistance’ has to be the “Remote Parking” feature. Use its special ‘intelligent’ key, which has a touch screen similar to your tablet or smartphone and find the ‘remote parking’ icon.

Press a small button on the side of the key and hit the engine start button. Remote starters might not be a new feature, but what happens next, is a world’s first, by pressing the forward or backwards arrow, you can move the car back and forth, while standing next to it.

Watching this happen in front of you for the first time, is like witnessing a magic trick, it is very cool indeed.

However, you have to be very close to the car for this feature to work and it only goes front and back, with very minor steering input, at the moment, so it really is only useful for those with a tight garage or have a tight parking spot in a condo building. This feature is only going to get more advanced, as time goes on, but just remember, you saw it on the 2017 5 series first.

So, you can sort of drive this car, while not even sitting in it, but what’s it like when you open the door?

Again, the new 5 series mimics the current 7 series model, albeit, with a nicer looking steering wheel, most of the instrumentation and infotainment system seems to be lifted straight out of the 7 series, which is not a bad thing.

As you’d expect, this luxury sedan has everything you’ll ever want and if it isn’t already there as standard equipment, it’ll probably be an option (such as, massaging seats).

However, choose the seat wisely, because the 5 series has some seat options and the ones fitted to my tester, didn’t suit me very well. I found out, that due to some intricate stitching design, the seat in my tester had this ribbing that would dig into my back. No matter how I tried to adjust it, that ribbing would still bug me. I found the same issue with the 7 series I tested earlier this year, which had the same seat design. I have sat in what is considered as the more ‘normal’ seat for the 5 series, and find it a lot better, so do sit in the seats for a while, before you sign the dotted line.

However, while all this luxury, style and tech stuff is important, what defined a 5 series, was the way it drove, as it was always the sportiest of its breed. So, is the 5 series still a sports car first and a luxury sedan second?

The simple answer is, no.

While the new 5 series handles well, it has softened a lot over the previous model. In all honesty, it just feels like a shortened 7 series now and its demeanor is tuned more towards plushness, rather than sharpness. This means, it’ll attract more 7 series buyers, who don’t need a full-size luxury car anymore.

Propulsion options for your new 5 series are plenty and the list will only grow.

In Canada, the base model is called the 530i and it’s propelled by a 2.0-litre inline-four cylinder motor that is turbocharged, with the net power output being 248 horsepower.

At the very top of the food chain, for the time being, is the M550i, which has a 4.4-litre V8 featuring twin-turbochargers, developing 455 horsepower. Then there is the 530e model, which is a plug-in hybrid and with just 180 horsepower on offer, you won’t be going anywhere in a hurry!

The model I had, was the 540i, which gets a 3.0-litre inline-six cylinder motor with a twin-scroll turbocharger (actually, all BMW turbos are twin-scroll nowadays), and it produces 335 horsepower and 332 pound per foot of torque. Power was sent to all-wheels (xDrive) via a smooth and quick, eight-speed ZF automatic gearbox.

Power delivery is smooth and while the car is quite quick (0 to 100 kilometres per hour in just 4.8 seconds), it never begs you to drive it quickly.

Perhaps, the average 5 series buyer has grown up and I’m just not old enough to appreciate the things they look for in a luxury car.

My tester, which had pretty much every option you can throw at a 540i, was stickered at $90,400. That is a lot, but then you get a lot of car. However, it just didn’t win my heart, perhaps the M550i or the upcoming M5, will show me the full potential of this new platform, and win me over!

Fanshawe students sing their hearts out