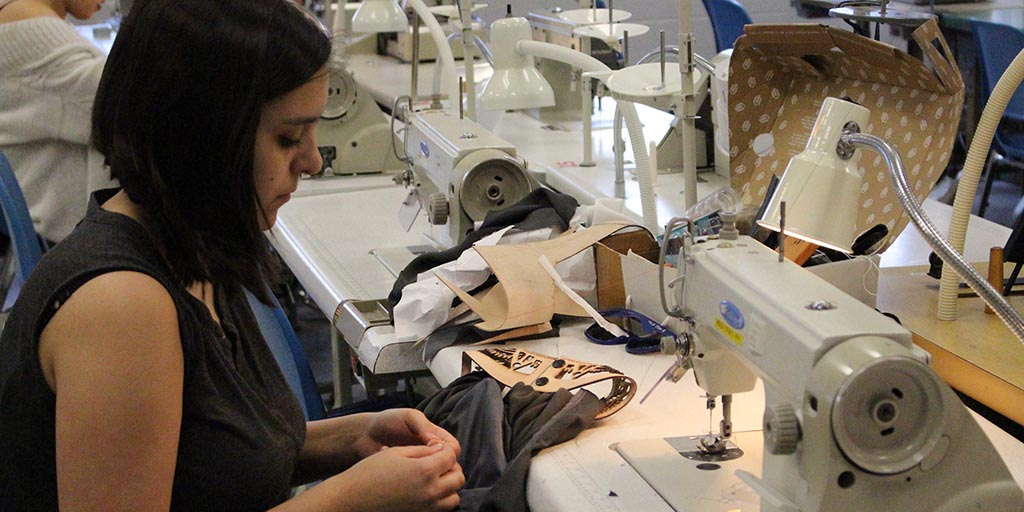 Fanshawe's third year fashion design students are working steadi¡ly while putting together the final touches to their collections for this year's Unbound fashion show.

The New York-style runway show, which includes a cocktail hour beforehand, will showcase the talent and work of the program's graduating class of 2017.

As with prior years, the event is looking to bring in some high profiled guests, such as Canadian fashion designer David Dixon and Fanshawe fashion design alumni including those currently working in the Toronto industry for compa¡nies such as Joe Fresh, Roots and Greta Constantine among others.

With the college's 50th anniver¡sary around the corner, the program is hoping to also bring alumni of all different programs back to campus for the night, as well as high school students interested in the fashion design program. Those students will have a chance to see the show's dress rehearsal and get a back stage tour of the show.

With that being said, the event has undergone some key changes this year, with one main difference being the location of this year's event.

Loren Carriere, a full-time pro¡fessor of Fanshawe's fashion de¡sign program and the Unbound fashion show director, said a key reason for changing the location from Museum London to the Nor¡ton Wolf School of Aviation Tech¡nology was simply due to space.

“We've always loved having the context of the art gallery, but we've been always struggling with capacity, over the 10 years we've outgrown it a little bit. We were looking for a bigger space so they can continue to grow in,” Carriere said. “Having done 10 years, we said it was our season finale [at Museum London]. You want to end on a high note and yet you want to start something that feels fresh and that builds on the branding of Un¡bound.” 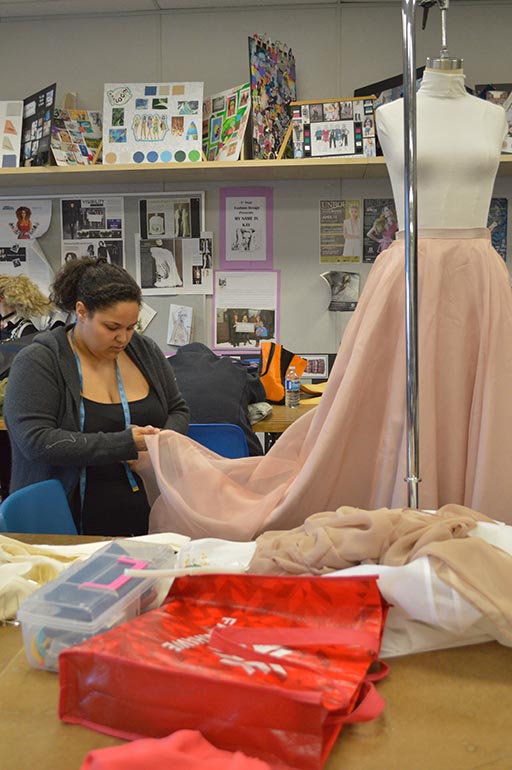 CREDIT: OLIVIA VAN BOXTEL Fashion design students are hard at work for the upcoming design for “Craft and Machine” on April 13 at the Norton Wolf School of Aviation of Technology.

According to Carriere, there have been a few “growing pains” with the location, in terms of plan¡ning and the logistics of having everyone and everything they need in the space, considering it's in an airplane hangar, but if all goes well, she sees Unbound happening in the new location in the future.

Other changes to this year's event include the collaboration between the fashion design program and other programs across the college, including students from the special events planning program, music industry arts (MIA), animation, video editing, marketing, fashion marketing and management and the hair stylist program among others. A technical theatre production crew will also be on hand to help with stage aspects.

“[It's] all embracing so it really is not just about a fashion design capstone, it really is about all of the School of Design and Fanshawe being represented at such a great event. I think because we do such a large industry show, we thought that having sort of [a] real life ex¡perience, it's such a huge advan¡tage to us with the fashion students, that we thought we would have the same kind of opportunity extended to other programs,” Carriere said.

Kira Brown, a third year fashion design student who, on top of creat¡ing her own collection, is also part of the Unbound marketing commit¡tee shared similar positive thoughts about this year's major collabora¡tion between other Fanshawe pro¡grams.

“We have so many different committees working together to make the show possible, instead of just us. It takes off a lot of the weight of planning [the event] and the thing is too, it's definitely more reflected of how an actual fashion show would be produced because it wouldn't specifically be just one section of people doing the whole thing,” Brown said.

A third strategic change this year includes the judging system.

According to Carriere, previ¡ously the events ran similar to the show Project Runway, where each student would have their collection assessed by a group of judges and then a winner would be announced. However, with that also comes a loser.

The fashion design department decided to change it up this year.

“We wanted to take away the competitive element and we just want it to be celebratory. I think we were starting to feel like there seems to only be room for a win¡ner, but we didn't feel like we only had one winner. We felt like we had a lot of winners and with so much diversity in the classroom, you couldn't event compare them, they're so dramatically different so we wanted it to really be about everyone celebrating their own uniqueness and their own growth as designers,” Carriere said.

Another aspect of the show that does change each year is the theme, with this year's being the concept of “Craft and Machine”, inspired by the 2016 Metropolitan Museum of Art (MET) Gala and its “Manus X Machina” exhibit.

Carriere, along with a group of fashion design faculty members went on a professional develop¡ment trip in New York City last spring and were able to view the exhibit and find ways to bring the exhibit's concept back into the classroom.

“Our students are in an environ¡ment in which they are in transition because they are surrounded by technology and yet it's really im¡perative that they don't lose sight of some old school techniques. We thought given our new venue being literally in an aircraft hangar, that we could bring that kind of paradox of man and machine because it's so vast,” Carriere said. “It can mean so many different things to differ¡ent students and it really opened the door for them to be really creative.” 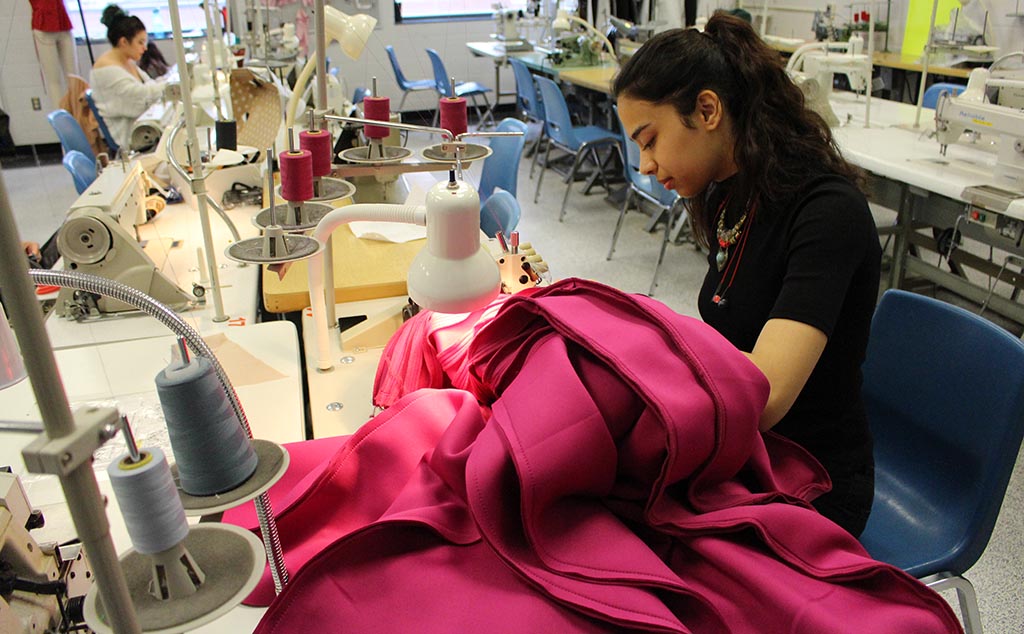 CREDIT: MELISSA NOVACASKA Manar Shams, a third year fashion design student, works on a bottom portion of one of her pieces for this year's Unbound fashion show.

Carriere said that with a theme that involved more couturier tech¡niques, a lot of work and time was needed which meant restructuring third year courses and getting the students to start working on their projects in September, rather than months later.

According to Carriere, some col¡lections will include 3D technolo¡gy, laser cutting, LED lights, bead¡ing, twisting and manipulation of fabrics and custom prints.

“[We have] a lot of elements that with previous years we just didn't have the time to do. I think that will be a really exciting thing for those that are watching to see things that [are] a little bit more couturier-based as opposed to just what they're used to seeing, as re¡tail ready or commercial pieces,” Carriere said.

“I feel like every year kind of had a very general theme, it wasn't very specific, but this year it's all about how people see the theme and how they put it into their collection. Some people lean more towards craft, some more towards the ma¡chine and some are combining the two together and it really shows the creative way that people think and interpret things. It really reflects how the fashion industry is chang¡ing by integrating technology into creating things, so it's a really great way to move forward,” Shams said.

Something else that will high¡light the students' work is a pre-show portfolio event happening before the show. It will allow stu¡dents to mingle and network with industry leaders, while the students' work, collections, digital portfolio and banners are on display.

“We're making it really about the event and not just about the fashion show. Every year we say it's like the best one yet, and certainly over the years each graduating class has really looked to the class before to understand what the standard and the caliber is, and so they're big shoes to fill and we always think, ‘How are we going to do bigger and better because we keep raising the ceiling',” Carriere said. “I think the diversity in this group because we did embrace the “Minus x Machi¡na” design thesis, the diversity of the interpretation is amazing so I think for our public that are loyal Unbounders they will be really en¡tertained.”

Tickets for Unbound, “Craft and Machine” can be purchased online for $45 at www.fanshawec.ca/unbound.
Fanshawe students Fashion Unbound