Uber gets their way in a seven to six vote 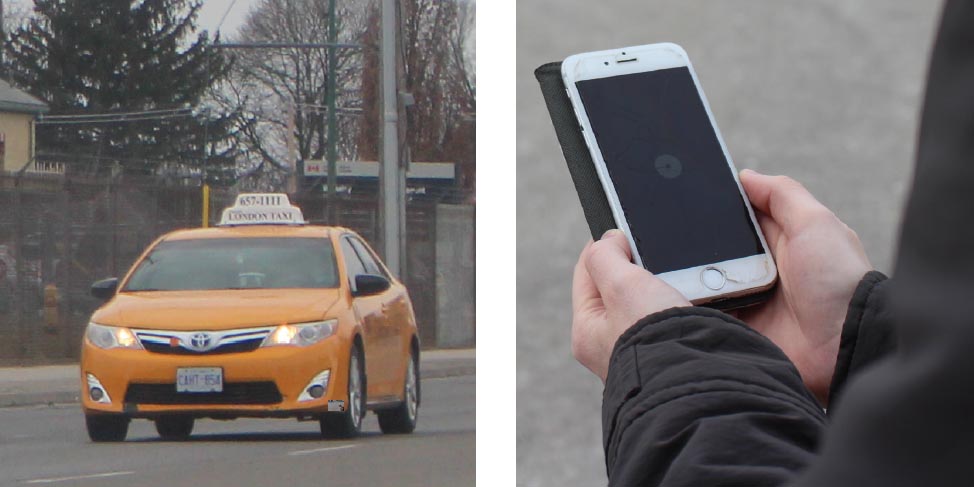 CREDIT: MELISSA NOVACASKA (LEFT), JESSICA THOMPSON (RIGHT)
After one councillor switched his vote, Uber is now regulated legally in London, and drivers are not required to have cameras installed within their vehicles.

The votes are in and Uber will not only remain in London, but will not be required to have cameras installed either.

In a Feb. 14 city council meeting, the viewing gallery was filled with a number of taxi drivers as well as some Uber representatives.

The results closed a chapter that saw council and drivers debate for roughly 18 months over the use of Uber in general, and most recently, the idea of cameras being installed in each Uber car, something taxis are well familiar with.

It came down to a seven to six vote on whether or not Uber cars are required to include camera within their vehicles, with Coun. Jesse Helmer suggesting an amendment where only vehicles picking street hailing people would need the devices in their cars.

This left a vote to Coun. Michael van Holst who changed his decision from a previous council meeting two weeks before, where he had initially voted to have the cameras installed. This time around he voted with Helmer’s amendment, meaning he voted not to have cameras as a requirement in Uber cars.

Coun. Armstrong who voted against the amendment stated that there needed to be an “even playing field” for everyone and that all vehicles should be following the same rules if they want to be in the game.

However Coun. Virginia Ridley said that cameras are not necessary, and that consumers know the risks, but want choice in what method of transportation they take.

Ridley said barriers need to be moved, so that innovation can occur within the city.

Mayor Matt Brown, who voted for the amendment, said at some point during the evening that voting on this bylaw needed to happen, since it’s been going on for months. “Over analysis is paralysis,” and that the decision needed to be made, or else there would be no progression and council would have to go back to the drawing board.

Coun. Maureen Cassidy suggested to even create a bylaw that would give taxis the choice of whether they want cameras in their cars, but retracted her statement after some much heated debate and heckling.

London Taxi Association representative Roger Caranci was disgusted van Holst switched his decision and stated that the councillor was under pressure from Uber and the calls and emails he was getting from them. According to Caranci, van Holst told him he didn’t want to “deal with the pressures coming down form Uber” and therefore he wanted to change his mind.

“I had a discussion with him last week in a Tim Horton’s in London and he was very, very scared of the pressure Uber was putting on him and he bent to what Uber wanted and that is very troubling to me that a member of this council, a member who is dually elected by representatives of the ward he represents, bows down to a company and does exactly what they want him to do and not hold him to the fact that he supported what was originally there and then tonight he changed his mind.”

Caranci said his group would be coming up with ideas from where to go from here, but no word on when that will be.

Deirdre Pinto, an Uber driver for about 14 months, said she was “very” pleased with the end results.

“I was really worried, but I knew that the community was pouring support into backing Uber in the last couple of weeks, when the camera requirement was made, and it just doesn’t work for our business model. I’m very pleased that we got that one councillor to change their mind and I’m very, very grateful to him.”

Pinto said now Uber can be proud of the service they’re offering, and can continue to do so legally in London.

Jason Kukurudziak, president of London Taxi Association said the outcome wasn’t a big surprise to him.

“I knew there’d be strong opposition by a core group of councillors to the cameras and they feel that Uber is safe without the cameras, and city staff proved them wrong, that it’s not safe,” Kukurudziak said. “You can make up complete bogus information, and take a ride, and is that really safe for the driver? And that’s what these cameras are for, is to protect the driver and the passenger. They were going to do what they were going. We did our very best to try and have them understand that it’s not safe.”

With a functional bylaw now in place, Kukurudziak said that regulating Uber means they will have to be licensed, drivers will have to get a criminal background check and to have a safe vehicle, all which he thinks is a step in the right direction.

Hasan Savehilaghi, president and co-founder of Yellow London Taxi, is also not pleased with the results and of how he thinks reflects all drivers who serve the London area who were in the viewing gallery during the council meeting.

“[I am] deeply frustrated, very angry, very dissatisfied, with pure corruption of a few individuals sitting at city council. Angry and frustration is what people felt, not just this meeting, even previous council meetings,” Savehilaghi said.

Savehilaghi said it takes a while for taxis to reach a councillor, and that council is not available to taxi drivers, yet they are for an Uber representative, which is hurtful to him.

“The fight is not over, definitely not,” Savehilaghi said.
London City Hall Taxi Uber

1
Women in Municipal Politics
2
Uber is out of control