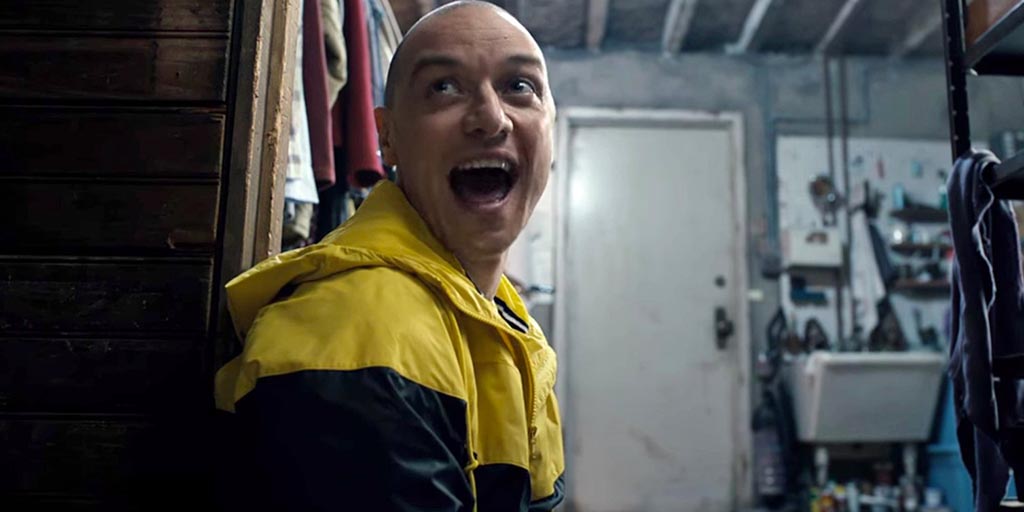 The psychological horror film Split is about a man named Kevin Wendell Crumb who has 23 different personalities. Crumb kidnaps three teenage girls and the movie follows their ensuing struggle to understand the situation and escape. Split is the latest film written and directed by M. Night Shyamalan, known for supernatural themes and twist endings.

There are times in this movie when the motivations of the characters don’t seem logical which is frustrating. There is a sense that this movie would be over a lot sooner if the characters reacted in a realistic way rather than in a way that is dramatic and convenient for the plot. Crumb kidnaps the girls by chloroforming one of their father’s in a parking lot and hijacking their car. It takes the girls an extremely long time to react, and when they do they are perfectly calm that a stranger just took the driver’s seat of their car.

He chloroforms the girls in the back seat, then girl in the passenger seat stares at him while slowly reaching for the door handle as if she can take her time. It doesn’t make sense that her instincts wouldn’t kick in and tell her to immediately evacuate the car, and it also doesn’t make sense that Crumb would stare at a girl he is trying to kidnap with her hand on the door handle instead of immediately chloroforming her so that she doesn’t escape.

That being said, M. Night Shyamalan makes up for these frustrating moments by being an excellent storyteller in all other ways.

The audience is immediately invested in the story and presented with exhilarating drama, which expands and unfolds in unpredictable ways.

Split is packed with creative concepts that are all tied together in logical ways. The pacing is ideal, with a gradual and calculated release of back-story information that gives the audience just enough to stay interested but never enough to dispel a sense of mystery, which allows for plenty of surprising reveals.

While the events of the movie are not beautiful, the cinematography always is. Every shot is eye catching and feels super wide. Every setting is compelling and unique. Scenes are shot from interesting and creative perspectives and there is a lot of Wes Anderson-like symmetry going on. The colouration of the film is pleasant; it looks natural yet slick and saturated. The way the film is lighted also comes off as thoughtful. Scenes where the girls are in captivity are dimly lit compared to others which makes sense and creates contrast and a fitting dark tone, though they aren’t dim to such an extreme that it is distracting or resulting in a generic horror movie look.

The cast of Split is excellent, with even the most minor characters delivering killer performances. James McAvoy delivers a truly impressive performance as Kevin Wendell Crumb. He proves himself capable not only of portraying 23 distinct characters of varying ages, genders, motivations and (of course) personalities with total believability, but also transforms from one to another before your eyes without taking you out of it for a second. Anya Taylor- Joy does a great job playing Casey Cooke and succeeds with all the challenges that come with portraying a smart, complicated and troubled character. The only exception is Haley Lu Richardson as Claire Benoit, one of the kidnapped girls, who just isn’t all that believable and comes off as kind of annoying as a result, though Neal Huff as her father portrays such a perfect, funny dad personality.
Movie reviews Movies