What Does Kerra Seay: If you're reading this, it's too late 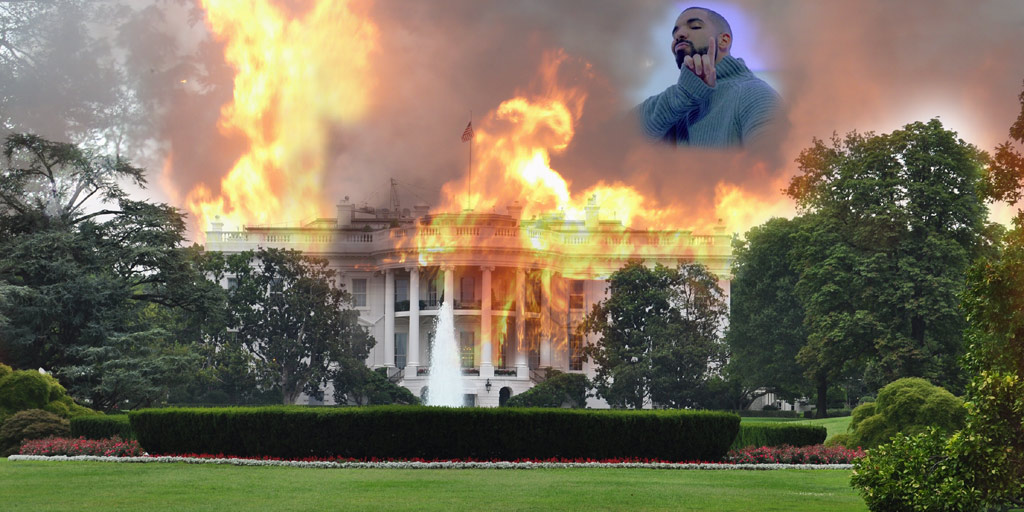 CREDIT: DESIGN BY DEENA GRIFFIN
This might be what America has to look forward to: destruction, desolation and maybe some Drake coming down from the heavens to bless us with his sick beats

By the time you're reading this, the U.S. presidential election will finally be over. I know it seems like we've been dealing with this circus of an election for like, 27 years, but really it's only been about two.

It's been such a long electoral process and so much crap has hit the fan that I'm honestly surprised we've all made it this far. So congratulations, guys. Give yourself a pat on the back because you've had to deal with a lot, and I'm proud of you.

Since I don't know the results of the election as I'm writing this, I'm going to make some predictions on how election night could turn out. Basically I'm covering my butt because one of these is bound to happen, and regardless of which one I'll probably end up crying in my room hugging my boxed wine, screaming into the void that the world as I know it is coming to an end.

According to most polls, Hillary Clinton has a substantial lead over Donald Trump, but just because the Internet is saying it doesn't mean it's actually true. But if the stars align and Clinton wins, she will become the first female president of the United States.

Though smashing through the glass window and flipping off the patriarchy sounds like a great idea, many are left wondering what a Clinton presidency would really be like. With so much focus on Trump's latest scandal, many (including myself, at times) have deliberately avoided a critical analysis of her because the alternative just seemed so much worse.

The email leak scandal is the biggest scandal that has haunted Clinton and her campaign because there's nothing like the threat of being arrested by the FBI to really throw your legitimacy as a leader into question. The FBI's first investigation did not seek criminal charges, though admitted that her actions were reckless and careless, but the organization has recently reopened the investigation once more emails were discovered thanks to Anthony Weiner's inability to keep his dick in his pants.

Is this email scandal as bad as openly bragging about sexually assaulting women? I don't know. But what it does show is that Clinton is prone to mistakes, even huge ones, when put in a position of power. And that kind of recklessness does not have a place in public office.

But even more troublesome is the idea that under a Clinton presidency the United States will likely take part in more international conflicts than ever before, and not in a peacekeeping capacity — her record shows she was in favour for starting multiple conflicts as well as expanding current military operations.

Her competition against Bernie Sanders may have forced her to change some of her policies to be more liberal, like with the change of her stance on access to post-secondary education, but she's still more politically right leaning than most Canadian politicians.

So this option doesn't look all that great. But wait, there's more.

A lot has been speculated about what a Trump presidency would be like, but a lot of that speculation has been a joke; my favourite prediction is that on the next election day in four years, we'll be cheering on our district's champions in the fourth annual Hunger Games. I hope mine wins.

But in a democratic system that has avoided a dictatorial takeover since 1787, I would be surprised if anything like this actually happens. But that doesn't really make the situation any better.

Trump has made his disdain for Mexicans, Muslims, refugees, women, the LGBTQ+ community and basically every minority group fairly obvious. If even half of the policies he has promoted along the campaign trail go into effect, being a minority in America will be even tougher.

If Trump wins, he probably won't even personally do that much in the role of president. What may seem like a joke does seem to ring true; I don't think Trump really wants to be president, he just wants to be a winner. The Trump campaign has even said that his vice presidential pick Mike Pence will be in charge of foreign and domestic policy… which is basically everything.

So Trump will likely sit back and watch what happens, all while holding the power to declare war on anyone who makes fun of his hair or his tiny hands.

I do think there will be a peaceful transition of power, you know, the cornerstone to democracy, if Trump wins. By this I mean that after four years there will be another election, and if he loses a second term he will step down.

I'm even optimistic that if Trump loses the country will not be launched into civil war, but I don't think it will be smooth. If Trump loses I expect some violence, but mostly in small pockets of the country where Trump's rhetoric of a “rigged election” has found its mark.

So no, neither of these two options are good. One is a reckless, war-mongering pretend- Liberal and the other… I don't even know how to begin to describe Trump, so all I'll say about him here is that he is a deeply unknowledgeable and unprepared fool who, for some reason, thinks he's fit to run a country.

But, since the election is already over, it's too late. All we can do now is deal with the consequences and hope for the best.
Editorial opinions or comments expressed in this online edition of Interrobang newspaper reflect the views of the writer and are not those of the Interrobang or the Fanshawe Student Union. The Interrobang is published weekly by the Fanshawe Student Union at 1001 Fanshawe College Blvd., P.O. Box 7005, London, Ontario, N5Y 5R6 and distributed through the Fanshawe College community. Letters to the editor are welcome. All letters are subject to editing and should be emailed. All letters must be accompanied by contact information. Letters can also be submitted online by clicking here.
Donald Trump Hillary Clinton U.S. Politics

Reyno Rants - Spoiler alert: Some of us haven't watched it yet

Home away from home: Challenges of studying out of the comfort zone