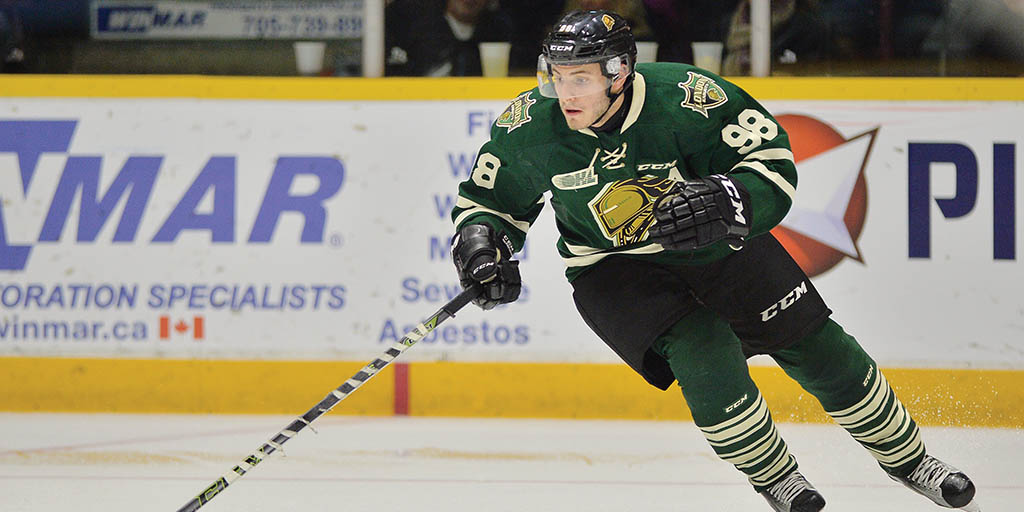 CREDIT: TERRY WILSON - OHL IMAGES
Victor Mete will be the only Knight playing for the 2016 CIBC Canada Russia Series for the Hamilton team.

The London Knights (8-2) suffered a 4-3 overtime loss on a Oct. 28 contest against the Sault St. Marie Greyhounds (10-5); the Knights now sit third in the Midwest Division.

As the Greyhounds currently sit in first place in the West Division, Friday night's contest would prove to be a difficult game fought right to the bitter end.

The first two periods consisted of a constant momentum change as each team alternated in goals. Some notable players for the Greyhounds consisted of Gustav Bouramman, Morgan Frost and Boris Katchouk who all managed to score a goal. Responding to the Greyhounds' offensive stride was Knight's Owen MacDonald and Janne Kuokkanen of Finland. With a score of 3-2, the Knights would look for one more to even it all up. As the third period began, both teams were looking for the pivotal goal that would either put it away or bring it right within reach. Fortunately for the Knights, center Cliff Pu netted his eighth goal of the season giving the Knights a fighting chance. As the third period drew to a close with a score of 3-3, overtime was needed to decide a victor.

However, despite the Knight's best efforts to even out the score, the Greyhounds ended the contest scoring the deciding goal just 39 seconds into overtime.

In a post game interview, Knights defensemen Victor Mete had some encouraging words for his teammates, despite the overtime loss.

“I think we played pretty good after the first period. We were off to a slow start but we came out sharper in the second and third period and that's all I can ask for.”

Mete, who is currently in his third season with the Knights, is one of the unit's top defensemen. In 13 games, Mete has posted an impressive seven assists and five goals amounting for a total of 12 points.

Mete has also recently been named to the OHL roster for the 2016 CIBC Canada Russia Series for the Hamilton team. The competition has been on for 13 years with the OHL record being 22-3-1.

Mete is the only Knight to be named to the roster.

Being one of only five defensemen to earn a roster spot, Mete is excited to compete on an international stage.

“It's good to represent the OHL and be able to play against Russia. It's a great opportunity. I've been playing well up until this game and hopefully my hard work will pay off during the series.”
Hockey London Knights OHL