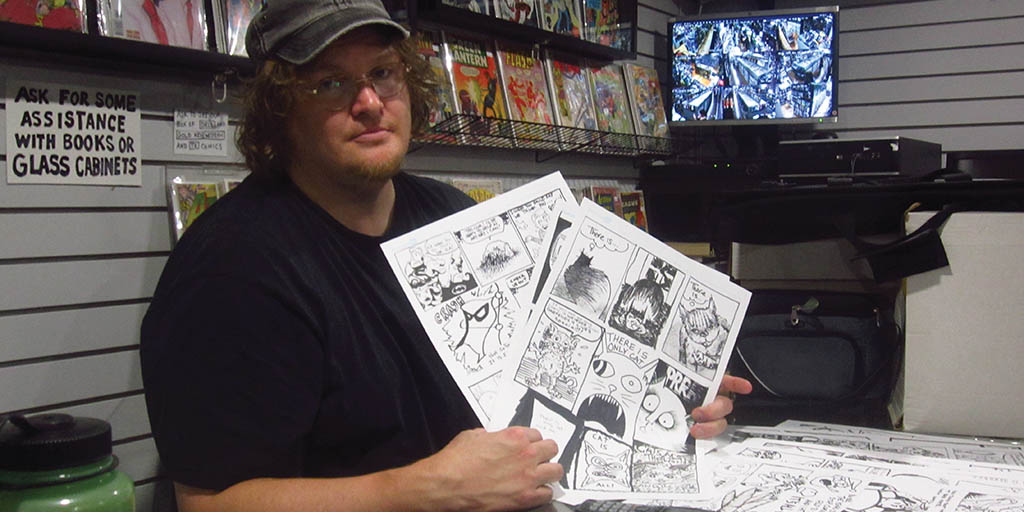 Runciman Press Creative Director and Assistant Manager of Heroes, Christopher Runciman, holds some of the comics created during the Comic Book Jam at the ARTS Project.


Manager of Heroes Comics, Christopher Runciman, is active in London's growing comic book community. Many of London's comic readers and collectors will line up for at least an hour or more to grab up to six comics during Free Comic Book Day. Heroes Comics, located on 186 Dundas, said on their Facebook page that they saw more than 2,300 people snag 15,000 comics in previous years.

For Free Comic Book Day 2016, Heroes shut down Dundas Street between Richmond and Clarence to bring in several activities and vendors, along with both a Batmobile and Ghostbusters van in the streets.

Runciman is also the creative director of Runciman Press, a local and independent comic book publishing company, and hosts Comic Book Jam nights at the ARTS Project on 203 Dundas Street.

What is Comic Book Jam, and how can I participate?

During Comic Book Jam guests will take turns drawing panels and creating a story on a single page as a group. Then, people who worked on the page will sign their names on the back.

He said he was asked to do a Comic Book Jam night as part of the third annual Ting Comic and Graphic Arts Festival, which honours former London Free Press editorial cartoonist Merle Tingley. However, Runciman knew that he wanted to do more than one Comic Book Jam.

“The problem with setting up something like this is that if you schedule this day at this time, depending on people's schedules, they might not be able to reschedule themselves so they can attend,” he explained,. “If you do it over a long enough period, people have that ability to have that affordance of opportunity.”

Runciman estimated that about 40 people total attended during the summer. “We've had all ages show up. We've had all different kinds of abilities, styles and directions of storytelling show up at the event and bring their work into the mix,” he added.

Runciman said a variety of stories, from cats' outlooks to beards, were created. He laughed while describing a comic about a rock that is offered a superhero team membership.

“It says, ‘Oh, thank you that's wonderful. I hope to do my best',” Runciman said. “The course of the page takes all these crazy twists and turns, to the point where the world blows up and all that's left is this rock floating in space saying, ‘I did my best'.”

Runciman explained that while the story guidelines are anything goes the creators need to keep in mind that the Comic Book Jam is an all ages event. “We just ask people to be courteous towards that, and that the more outlandish and swearing and nudity [included], of course you diminish the market of people that could show to be involved in it.”

Runciman added that there are “a lot of wonderful, challenging aspects to [the Comic Book Jam] that sort of foster growth as storytellers and as artists to be able to work outside of our comfort zone.” He said some of them are “being able to bring your style to the presentation that has been presented, trying to ingratiate their style into yours, or to try to do justice to the page and the story idea that's been presented.”

Runciman said judges will select 24 stories out of 30 to be published in an exclusive London Comic Con book. The London Comic Con will be at the Western Fair District (316 Rectory Street) from Sept. 23 to 25. The book will be sold for $5 each, and participating artists will receive their own copy.

Runciman Press has published 24 books so far, including three New Apartment anthologies. The anthologies, including an upcoming fourth one, contain a collection of four-page short stories in comic form. All of the proceeds from any purchased book from Runciman Press go right back into the business, so the pair can publish more books.

Runciman said the comic book creators own the copyrights and creative rights to their original characters and stories. About 30 people outside of the Comic Book Jam have submitted material for the New Apartment anthologies. He added that giving these artists a chance to publish their material is part of the Runciman Press mandate.

“It's an opportunity we're able to present to other creators that might not have been published before or might not have very many opportunities. It's really important for us to be able to foster and grow this creative community.”

Runciman Press anticipates expanding their online presence to attract readers from around the world, and so people are able to download digital copies of their comics.

Email runcimans@gmail.com to send in your work.