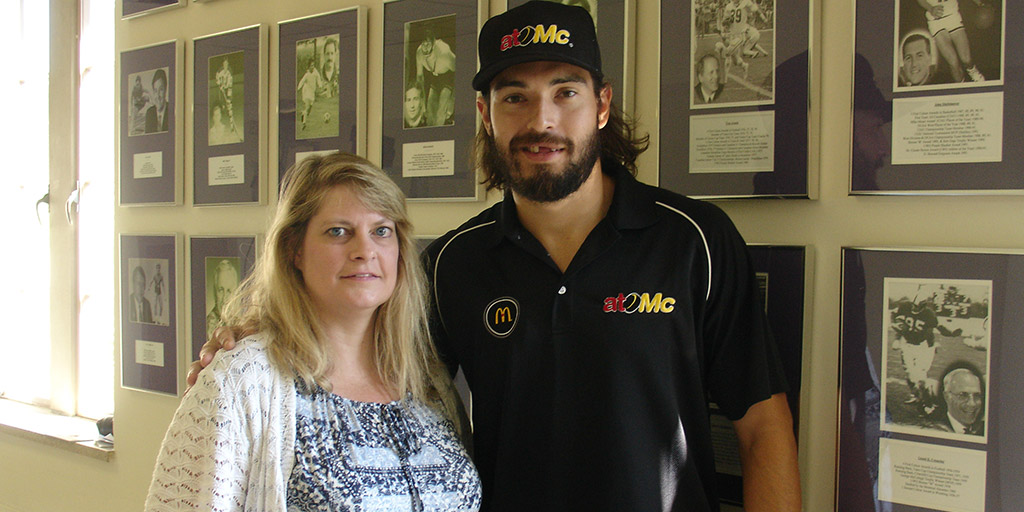 CREDIT: JESSICA EDEN
Sharrie Hennessy (on the left) standing with Drew Doughty (on the right)

On August. 4, Drew Doughty, atoMc ambassador and current defenceman for the Los Angeles Kings, joined atoMc for a day of activities to honour Sharrie Hennessy.

Hennessy, the London McDonald's community relations representative, was acknowledged for her contribution to atoMc in the community.

“I've been working for McDonalds for 25 years but the atoMc program hasn't been around for that long so I've watched it grow from the beginning, which is great. It's getting more and more kids involved every year, it's wonderful,” Hennessy explained.

Each atoMc hockey association division across Canada is provided with a kit that includes equipment for the coaches, jerseys and socks for the children, and a “golden moment” jersey that is awarded to a different player each week that he or she has the honour of wearing to their next practice.

Drew Doughty said that it had always been his dream to play in the NHL, and is now a two-time Olympic gold medalist and two-time Stanley cup winner. He expressed his excitement about giving back to the community and having the opportunity to spend time with the children in the program.

“I'm going to be involved with them the whole time, goofing around with them and stuff like that and teaching them what I can so I hope they have a lot of fun today and enjoy their time,” Doughty said.

Hennessy coordinated the past community events for atoMc including a day with the London Knights and walking in the Santa Claus parade with the Ronald McDonald house.

The event consisted of the children participating in four different activities: basketball, volleyball, soccer, and track.

“Drew is going to circulate and play with the kids at each one of the activities and then McDonalds is supplying them with a complimentary lunch too for coming so the whole event is free, paid for by us, so it's pretty good for them and a nice way to end their season,” said Hennessy.

Doughty hoped that the children at the event would find him easily approachable and have fun, meanwhile exemplifying the importance of teamwork.
atoMc Hockey NHL

1
Does anyone remember The Mighty Ducks?
2
What to expect from sports in 2021
3
New Year's Eve hockey: Canada's top tradition
4
What is the future of women's hockey?
5
The Hockey Canada scandal shows why hockey culture needs to change