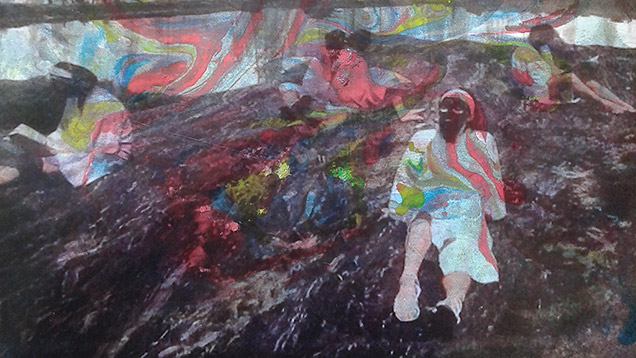 New London, limited to 265 copies, also has a number unique covers made by musicians on the compilation.


The history of the flexi record goes all the way back to the 60s when they were first introduced as an inexpensive way to give music away in magazines in the time before CDs became commercially available.

For over three decades the Soviet government would give away free flexi discs in magazines for children and youth, while back in North America at the same time National Geographic used the medium to distribute the songs and calls of humpback whales and the cosmos.

The small, seven inch sized sheets of plastic are etched, like vinyl records, and though are lower quality than vinyl records, were also much cheaper to produce. For this reason the flexi became popular with small, independent bands as a way to sell records at a fraction of the cost.

Using manufacturers in the Czech Republic, six bands ranging from post punk, noise and grindcore came together to show what London's DIY music scene has been up to.

Fresh from their work on another compilation, a soundtrack to the comic book “The Humans”, Child Leash brought their song “Bird Boy” to the roster, a lo-fi noise punk number.

The second half of New London begins with folky post-rock outfit Molly Drag's “Power Trip Apathy”, a slow Flaming Lips-esque tune, giving the sensation of floating in the ocean alone.

Disleksick, the self-proclaimed most hated band in London, brought “We Cut Up A Live Recording” to the comp, a harsh song which showcases the nine year old grindcore bands so-ugly-it's-good sound.

Finally is London favourites The Syndrome with “Jerk”, ending the compilation with a classic hardcore punk tune reminiscent of Minor Threat.

Printed on the see-through green plastic and limited to only 265 copies, New London is a primer for anyone interested in London's DIY music scene.