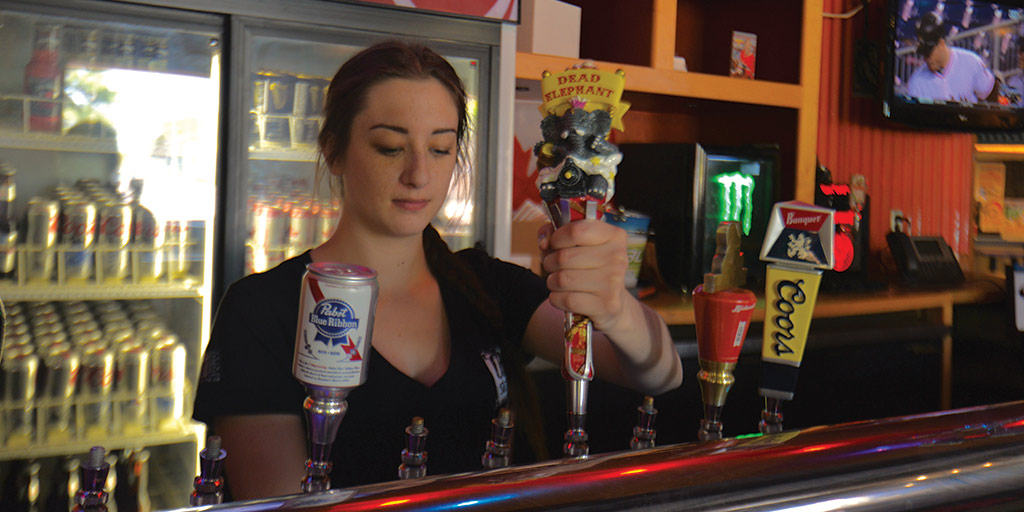 Maddy Trymbulak pours a pint of Railway City's Dead Elephant IPA in The Out Back Shack.


Are you tired of your beer snob buddies judging your drink choices? Are pints of Budweiser and Coors Light starting to wear you down? It sounds like you're ready to enter the magical and exciting world of craft beer.

Craft beer is generally made on a small scale by independent companies called microbreweries. This type of brewing could be likened to any other artisan food but saying ‘craft beer' just sounds a little less pretentious.

When carving out an appreciation for craft beer, it's usually best to start with local brews. Not every craft beer will be a perfect fit and getting to speak with a brewmaster about their own beverage isn't an opportunity that comes with big brands like Budweiser or Coors Light. In addition to this, most microbreweries have a thick network of working relations with other local businesses, so supporting their beer supports the city, too.

All of the breweries offer a blonde ale or lager that they recommend to anyone starting out on their craft beer quest.

When asked about their own beers, Forked River founder Steve Nazarian, recommended to “…always start with our blonde ale. It's what we call our gateway beer. It's nice, it's light and finishes off a little bit citrusy.”

Blondes are a relatively failsafe path into the craft world, as they tend to be far less hoppy than a pale ale or an India pale ale (IPA).

You can tell a beer is hoppy by the bitterness left on the tongue or for unseasoned drinkers, a devastatingly harsh assault on your taste buds. Hops are widely used to balance the sweetness of malted grains in beer but it also acts as a natural preservative for the brew.

It's best to stay away from India pale ales when starting out, as they are known primarily for their bitterness, shown by a high IBU rating (international bittering units). Most beer emporiums will list a beer's IBU beside its alcohol content so as a last resort, look for the beer with the lowest rating.

IPAs came about 300 years ago when British breweries had to increase the amount of hops in their beer to ensure it would last the long sea voyage to India.

Jumping right into an IPA is a great way of being forced to admit to beer snob buddies that you've made a grievous error. While things like citrus and caramel are easy to pick up when there's not much competing for your attention, the bitterness of a finely hopped beer can cover up a drink's complex flavor palate for people unfamiliar with its nuances.

If you're looking for a specific place to start this summer, opt for some of the seasonal beers in stock. While Microbreweries often have a small number of mainstay beers, they frequently cycle limited edition and seasonal brews. This gives the drinks an air of exclusivity, while allowing the brewers to release beers that compliment particular times of the year.

Summer beers tend to be light, sweet and fruity so this is the perfect time of year to get into craft beer. Take Forked River's summer wheat beer Mojo; it's a light and zesty beer with subtle rhubarb tartness. According to brewmaster Steve Nazarian, Mojo's bright flavours make it a refreshing patio beer, while the citrus bodes work well with summer fruit platters.

According to Sonya Cockburn of Railway City, since Gypsy doesn't contain any hops it's technically a gruit, not a beer. Gruit drinks pay homage to a method of brewing popular between the 11th and 13th century, which favoured herbs such as sage and rosemary to bitter the beers before the use of hops became common practice.

If you ever get confused during a beer conversation, change the focus and bring up Gypsy. Knowing its backstory as a gruit will win you some serious points with beer snobs, believe me.

If you're still nervous to head down to a beer emporium like Milo's, have no fear. We live in the glorious year of 2016 where you no longer have to go to a pub to enjoy a good craft beer. Thanks to LCBO and the Beer Store, all troubleshooting can be done at home before going toe-to-toe with your buddies on Richmond Row. The LCBO's craft collection has been growing significantly from a modest shelf to an entire section that holds its own quite nicely beside the big name beers.

In fact, LCBO has raised the bar against the Beer Store by bringing out a fun shopping idea called ‘secret suds'. Secret suds are LCBO bags with a few words written on them and a secret assortment of related craft beers inside. It's a risky yet rewarding way to discover new beers while eliminating the time spent researching them and reading through labels.

Whether you'd like to opt for a brewery tour and tasting, or grab a secret suds bag from LCBO, discovering a good variety of craft beer will improve your summer dramatically. It's the equivalent of discovering that white bread with the crusts cut off isn't the only way to have a sandwich.