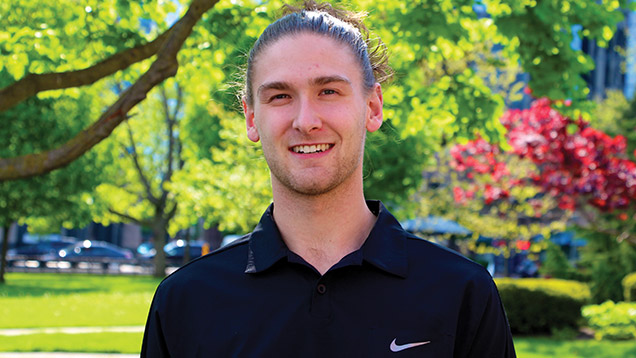 After being named a top post-secondary competitor at the OTSC, Ryan Zantinge enjoys some sunshine before heading to nationals.


Fanshawe College took home eight medals from the recent Ontario Technological Skills Competition (OTSC) in Waterloo on May 2 to 4. Students from the Business and Technology faculties displayed tremendous talent in their fields winning four gold medals, three silvers and one bronze. The OTSC brings students from across the province together for a weekend of competition, seminars and networking opportunities. The event typically sees over 2,000 participants competing in 67 contests, making it Canada's largest skilled trades competition. Fanshawe's four gold medalists proceed to Moncton, N.B., this June where they will compete against fellow finalists at the National Skills Canada Competition.

Among those headed to Moncton is Ryan Zantinge, an Architectural Technology student entering his final semester this fall. Zantinge won a gold medal in his field, competing alongside fellow Fanshawe student Shawn Dixon who received the silver medal.

Not only did Zantinge receive a gold medal for his work, he also received the highest score of all post-secondary students at the competition. To commemorate his achievements Zantinge received the Skills Ontario Award, complete with a second medal and a monetary bonus.

Zantinge felt he had a competitive edge coming into the competition because of the schooling he has received.

“One of my teachers in high school recommended Fanshawe over all the other architectural technology programs in Ontario. I took his word for it and I'm glad that I did because it's turned out for the best,” Zantinge said. “It was nice having done [OTSC] the year before. I kind of knew what to expect and I had another year of school and work experience under my belt.”

Winning the gold medal would have been more than enough for Zantinge, who had no expectations of placing in the top three. “I got called up, got my gold medal, and I was super stoked about that.”

It wasn't until the Skills Ontario Award for secondary schools was announced from a closely related field that Zantinge thought he might win the award for post-secondary students. He said that being the top competitor had only just crossed his mind as they called out his name. “I was absolutely blown away. I had no expectation of winning that. I didn't even know it was a thing until then.”

It's no fluke that Fanshawe took home the top medals in this category thanks to a mock competition held by professor Gary Gerard. For the past six years, Gerard has been responsible for coaching the students who place highest in these mock events.

When asked how he felt about Fanshawe's success, he spoke fondly of his faculty's history at the competitions.

“[This is] our fifth gold medal in provincials and we've won two of the last three national ones. I hate to say it but the hard work pays off.”

Gerard and Zantinge worked closely while preparing for the provincials, running over previous competitions and troubleshooting tricky components of tasks. Zantinge has been gaining additional experience this summer working at the Architects Tillmann Ruth Robinson firm as a technologist.

Things are clearly looking up for Zantinge as he looks to uphold Fanshawe's reputation at the National Technological Skills Competition this June.