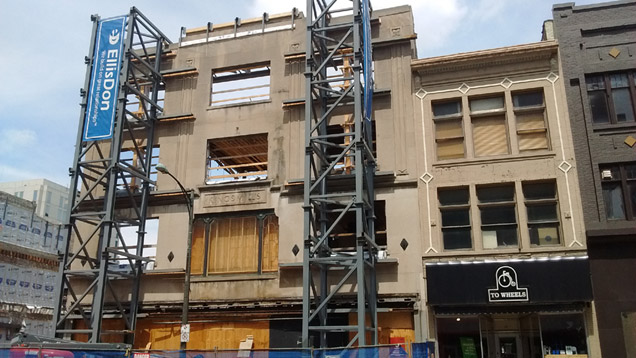 The construction project of the former Kingsmill building will provide a new facility for Fanshawe students in Information Technology and Tourism and Hospitality programs.

A team of workers has spent the past few months temporarily bracing the Dundas Street limestone façade and neighbouring common walls, according to a press release. With the completion of this task the project is ready to proceed to the next step which will require demolishing of the remainder of the building.

Joanna Dales, corporate communications officer at Fanshawe, said now that this phase of the project is completed the construction site will look far more traditional to curious onlookers.

Once completed, the construction project of the former Kingsmill building will provide a new facility for Fanshawe students in Information Technology and Tourism and Hospitality programs. More than 1,600 students will soon be studying in London's downtown core.

Dales said this $66.2 million project is a “game-changer” for the city.

The construction project is not a typical one. The plan did not involve simply demolishing the existing building and starting fresh. The building is located in the designated Downtown Heritage Conservation District, and Fanshawe's building design has to meet certain preservation standards before construction was permitted to begin.

The red brick façade had to be carefully removed, catalogued and stored, according to a press release. It will be reinstalled in 2017 during the final stages of construction.

“Fanshawe is committed to making every effort to restore the historical Dundas Street façade consistent with the approved Heritage Conservation Plan,” Dales said.

Dales said Fanshawe saw the need to increase its campus size due to an increase in enrollment. Dales added that the new facility will boast high quality equipment and classrooms to students.

The new facility is scheduled to open September 2018.