Flying too close to the sun 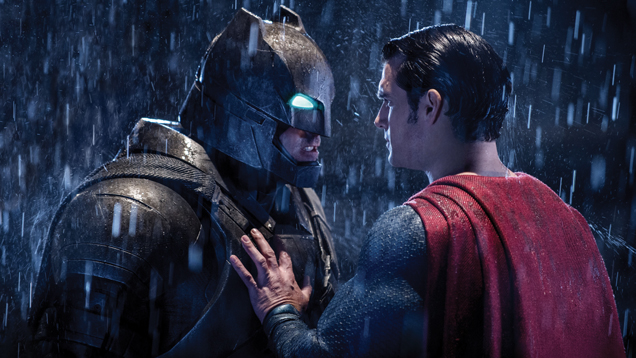 Credit: WARNER BROS. ENTERTAINMENT INC. (2016)
In Batman v Superman: Dawn of Justice, no one is safe as two giants go head-to-head to fight for the fate of mankind.

A god walks among men, toppling buildings with a look, destroying cities with a muscle flex, murdering thousands with a careless breath. Left unchecked, Superman could quickly become Earth’s greatest threat. Standing up against this threat is Batman, watching from the dark alleys of Gotham as Metropolis worships its destructive idol.

Batman v Superman: Dawn of Justice is a movie that is full of problems. Some of the issues come from director Zack Snyder’s desire for overly artistic perfect shots, even if those make no sense and force the actors into super uncomfortable positions.

The best example of this is the retelling of Batman’s origin story. Not only is this shown twice in the movie that isn’t even about Batman, but it offers nothing to the plot except to let Snyder make a neat shot with a pearl necklace and remind the audience (again, twice) that Batman’s mother was Martha Wayne, something that could have been shown in two seconds with Bruce putting flowers on his mother’s headstone.

All of this wasted screen time could have been put to far better use. Instead of showing us a plot everyone and their newborn baby knows, the writers could have included a scene that explains how Lex Luthor knows who Batman and Superman really are, or his motivation for wanting to kill Superman at all. Even better would be if they found the time to actually say the name of one of their leads, Diana Prince (aka Wonder Woman, played by Gal Gadot).

The lack of a name for Diana is depressing, and completely typical of a movie that reduces the previously awesome Lois Lane to nothing more than a damsel in distress. There are only three women in the entire movie (well, three that aren’t immediately murdered), two of whom are only used as bait for Superman and none of whom speak to another woman once in the entire 151-minute runtime.

The hardest part of this is that none of the many problems with the movie are on the actors. Ben Affleck, finally getting to be Batman after years of pining for a decent superhero roll, does a genuinely amazing job in both of his rolls. Henry Cavill is an uninteresting, but consistent, Superman. Gal Gadot is a total badass even without a name and Jesse Eisenberg makes an alarmingly convincing sociopath (even if he occasionally seems to be channelling Jim Carrey’s Riddler).

Batman v Superman: Dawn of Justice is a movie that was full of amazing potential, but suffered the fatal flaws of terrible writing and awful direction. The acting, costume design, music and scenery were all fantastic, but fail to make up for the many plot holes and clichés that curse this film.

Get a new wardrobe on a budget