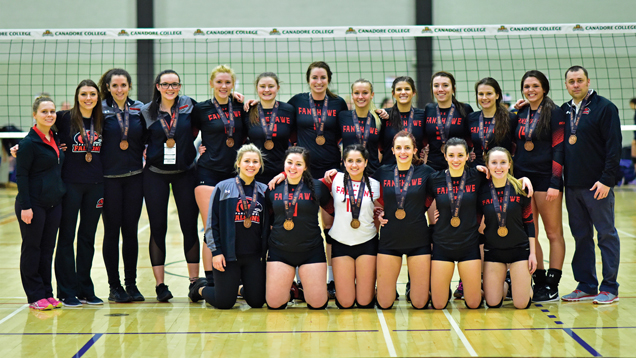 Fanshawe last won an OCAA medal back in 2013.

According to head coach, Sean Pellow, the team managed to finish strong even though they were put in a difficult pool.

“We had three matches, I think we had, in my opinion, the toughest route to go through.”

The team first had to go up against Conestoga, who was the home team and had their fans supporting them.

“That was a tough match emotionally to get through and the girls did a great job of controlling that and winning,” Pellow said.

The team then defeated the Durham Lord (20-3) in a five set match; this was the game that allowed them to win the medal.

Fanshawe’s lone loss of the championships came at the hands of the undefeated Humber Hawks, who are currently ranked third in the Canadian Collegiate Athletic Association (CCAA).

“We pushed them as well as anybody all year has pushed them, so we are pleased with that even though we lost the match, we saw that as a victory for our program,” Pellow said.

Fanshawe’s Renee McCormich was named a Championship All- Star. But according to Pellow, he believes all the girls did amazing this past season.

“The one thing that I am most proud of is the culture that was created in our program where there is no selfishness every kid is really in it for the team and the program rather than their own stats or own status within the group.”

With sights set on the upcoming year, Pellow believes in doing things to move forward and wants to get the girls back into training to make sure they are ready for next season.

“I am pretty adamant about planning and making sure things you are doing things to move forward, so we will take this week off and then we are back in next week starting to train and [revamp] some of our technical skills and we are going to start preparing for next year.