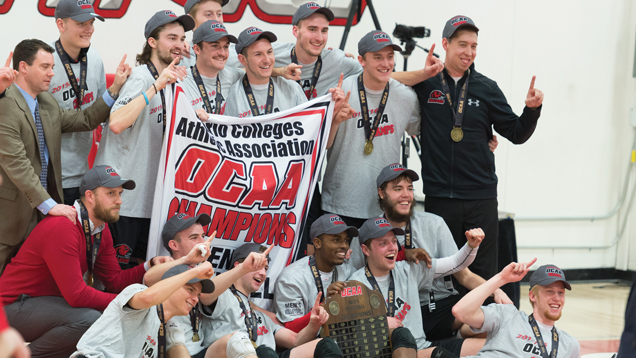 This is the second time in Fanshawe's history that the men's volleyball team has claimed the OCAA championship title, the last time being in the 1969-70 season.

“It feels amazing to be able to put a banner in the gym… it is great to be able to get the second provincial championship in the school's history,” said Patrick Johnston, head coach of the men's volleyball team.

The Falcons finished the championships undefeated with victories over the Trent Excalibur, Sheridan Bruins and the Mohawk Mountaineers.

“I just tried to help the boys out and put them in a good spot, they really helped me out with their passing and the vibes on the court were amazing and helped me calm down on the court; we put on a nice calm and collected offence.”

Regarding the win, the team is still in shock.

“It feels surreal, it was a nice month and a half of preparation the boys did, we got in a good head space, we got our eyes set on what we want, but it feels even better knowing that our job isn't done.”

The Falcons will represent not only the college, but Ontario as well at the CCAA National Championships from March 9 to March 12 in B.C.

“Out west they are all big guys, but if we just play our volleyball which we have been doing the last month, which has been a better half of the season, then I think it is anyone's game,” Lethbridge said. “When we show up and we play well, it is tough to stop us.”

And according to Johnston, the momentum gained from the second half of the season will help the boys play their type of game in the championships.

“The way the second semester has gone makes the guys feel confident, we haven't lost since the Niagara tournament in December, so being able to ride this kind of streak gives the team confidence heading into a national championship.”

As the team sets out west to nationally represent Fanshawe, Lethbridge wanted to thank students for the support the team has received.

“I would like to thank everyone who has come to a game or stopped by… the support this year has been amazing, hopefully we can bring a national title home for Fanshawe.”