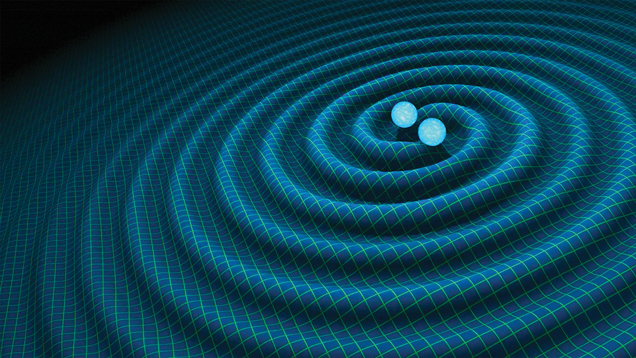 U.S. physicists proved the concept of gravitational waves in a set of cataclysmic observations with their work published in early February. For the first time ever, fluctuations in space-time itself were measured after physicists using the Laser Interferometer Gravity-Wave Observatory (LIGO) were able to capture the final seconds of two black holes merging.

According to an article by ScienceNews published in early February, the find is significant because it proves Einstein’s 1916 theory of general relativity. Newtonian Physics would explain the objects gravity as bringing the objects closer together, an event in space. In reality, extremely large masses cause the warping or depressing of space-time itself, an event of space and time.

As the two objects fell into the same space-time “depression”, they became one object, with the energy released causing ripples in the very fabric of space itself.

The two black holes were calculated to be orbiting each other at about half the speed of light and weighed about 36 and 29 times the mass of our sun, while the merged black hole weighed roughly 62 suns.

At their final moment, the black holes were calculated to be spinning at 4500 revolutions per minute or 75 times a second. All of this was happening in an area about 210 kilometres in diameter.

The tests, performed in two facilities in Washington and Louisiana, were conducted by pointing a high powered laser at a beam splitter which goes in two directions at a 90 degree angle from each other, with each path going along a four kilometre tube.

At the end of the tubes are mirrors, which bounce the laser light back towards a detector, causing a specific pattern to emerge when the data is fed through a sophisticated program.

When the ripples in space-time occurred, it caused the path length of the tubes to change as well, about a thousandth the width of a proton as reported in an article by Science- News, but enough to be measured, causing a different interference pattern to emerge.

This is the first direct detection in the scientific community of gravitational waves and also the first observation of a binary black hole system merging, which has been previously unavailable due to the accretion disk surrounding event horizons of black holes.

The discovery opens a new realm of possibilities for gravitational- wave astronomy, allowing for the detection and measurement of previously unobservable black holes, neutron stars and pulsars.

Research published at the end of 2015 from Chinese and Californian researchers looking at Bisphenol S (BPS), the popular replacement to Bisphenol A (BPA), has shown it can also cause similar negative effects on human and animal bodies.

BPA has been proven to cause the early onset of puberty and hormonal issues, and an increase in prostate and breast cancer among a number of other maladies.

The study concluded that BPS was responsible for increased hatching times, the equivalent of premature birth, in zebrafish models. The study was the first of its kind to study the effects of BPA and BPS on a range of brain cells, while also observing the continued effects during early growth.

In 2010, U.S. Food and Drug Administration (FDA) officially declared BPA was determined to function like an endocrine disruptor and exhibit similar properties to that of Estradiol an important hormone in puberty and women’s health. BPA is a commercial plastic used in everyday items such as food containers and store receipts.

The new research follows a similar study published in 2015 by Canadian researchers, which focused on specific changes in the hypothalamus structures of the brain of embryonic zebrafish when introduced to low levels of BPS.

The chemistry behind this unfortunate mix up in our bodies is that BPA and BPS have an alcohol functional group attached to a benzene ring; this structure mimics Estradiol.

Estradiol is primarily a sex hormone, but also has roles in bone, thyroid and liver health.

A major issue in combating these now-known pollutants is their ubiquity in everyday life. BPA is one of the largest commercially produced chemical compounds in the world, with over 10 billion pounds of it being produced in 2011 alone. Because of this, staying away from BPA and BPS means avoiding everyday items such as plastic and canned food containers; the linings of cans are made of BPA epoxy.

One thing is for sure, a worldwide replacement that’s not going to poison us or make children grow into adults at age 10 is needed now.

In the coming weeks, we’ll take a look at astronaut Scott Kelly and cosmonaut Mikhail Kornienko’s return from their record setting 340- day stay orbiting the Earth inside the International Space Station.