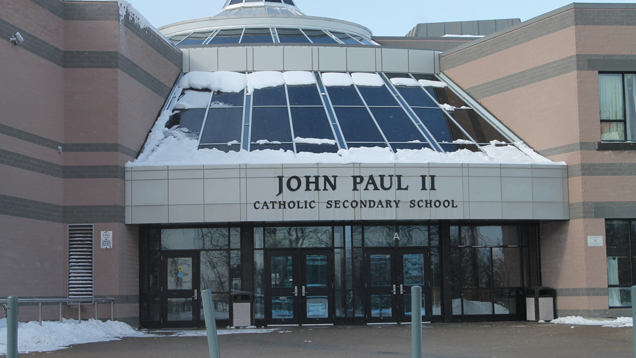 It has been pegged by experts that the potential savings from cutting funding to Catholic schools is around a billion dollars, money which could be used to improve public schools or lower the unemployment rate.


Editorial opinions or comments expressed in this online edition of Interrobang newspaper reflect the views of the writer and are not those of the Interrobang or the Fanshawe Student Union. The Interrobang is published weekly by the Fanshawe Student Union at 1001 Fanshawe College Blvd., P.O. Box 7005, London, Ontario, N5Y 5R6 and distributed through the Fanshawe College community. Letters to the editor are welcome. All letters are subject to editing and should be emailed. All letters must be accompanied by contact information. Letters can also be submitted online by clicking here.
Pulitzer prize winner Dave Barry hit the nail on the head when he said, “People who want to share their religious views with you, almost never want you to share yours with them.” Whether you’re at work or hanging out with friends, it inevitably turns into an adult version of ‘my dad can beat up your dad’.

Catholicism was the dominant religion when Canada was settled, so they got their own school system based on the time honoured ‘I got here first’ rule.

The Catholic Church has gotten a lot chummier since those days, but they’re still the only religion that gets publicly funded schools. It’s no secret that funding an education system that incorporates both public and Catholic schools is more costly than a consolidated approach. Experts peg the potential savings at a billion dollars, which could be used to improve public schools or lower the unemployment rate. For that kind of money, Kathleen Wynne could even cancel another gas plant.

The results are problematic given that there is a striking lack of evidence to indicate how this end result is achieved. ‘Inclusive environment’ and ‘faith-based education’ get bandied about a lot, but there’s little in terms of tangible evidence showing why Catholic schools excel.

Catholic high schools are stuck in a no-win position. Either they embrace the religious aspect of their existence and thereby negate their right to public funds, or they must accept everyone who applies and be a public school by definition. In a desperate attempt to retain some semblance of authenticity, they’ve taken an awkward middle ground in which they try to appeal to people of all faiths.

The recent budget for Ontario raised questions about where cuts could be made to stave off tax increases. The suggestion to amalgamate the two school systems came up in an online discussion and generated over 1,300 comments. Education is intended to give students critical thinking abilities, not religious beliefs. Therefore, the root of the issue is that Ontarians pay for an education system that defines itself by a belief system. It took an embarrassing public battle for Catholic high school students in Alberta to form a gay support group just last year. It’s bizarre that a publicly funded institution has to be dragged kicking and screaming into the 21st century. If history is any indicator, Canada will continue to grow in diversity. Cities like Toronto and Vancouver are prime examples of what the face of Canada will look like in just a few generations.

As ethnic and religious diversity increase, there will be an inevitable push against legislated preferential treatment. In the future, there has to either be equal support for all faith-based education or the government must withdraw funding from Catholic schools. In the words of Woody Allen “I believe there is something out there watching over us. Unfortunately, it’s the government.”