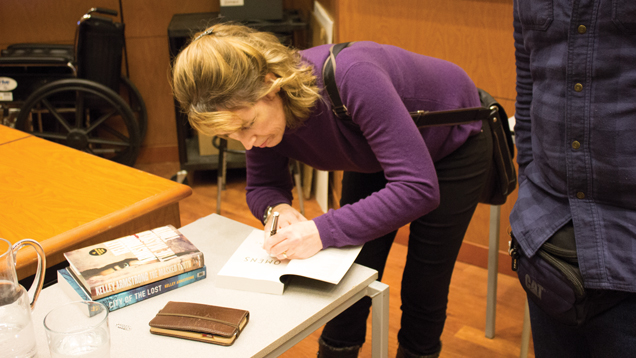 CREDIT: KERRA SEAY
Kelley Armstrong signed books for fans after giving a reading of two of her novels and answering questions at Fanshawe.

Canadian author and Fanshawe grad Kelley Armstrong came to Fanshawe for a reading of some of her novels and to give advice and tips to aspiring writers.

Armstrong came to Fanshawe in partnership with the Letters and Arts Society.

She grew up in Sudbury and later attended Western University to study psychology but ended up switching to Fanshawe to study computer programming in order to give herself more time to focus on writing.

Due to the success of her multiple series and over 30 novels she is able to work as a full-time writer.

Armstrong read from two of her novels and opened up a question period to the audience. She gave realistic advice to the aspiring authors in the crowd.

She said that a lot of what goes into becoming a successful author boils down to timing, talent and luck. “Being the best football player in your high school doesn’t mean you can make a living out of it,” she said.

Armstrong read from two of her novels, “City of the Lost”, a book about a mysterious city in the Yukon that only accepts people who are hiding from someone – or something, and “The Masked Truth”, a young-adult novel about a girl who attends a weekend therapy camp where the campers are taken hostage and are being killed off.

Her main series, the Women of the Otherworld, her most wellknown series, was first published in 2001. Featuring werewolves, vampires, witches and more in a modern setting, this urban fantasy series is set mostly in Canada, a unique setting for popular novels.

The series was turned into a show on Syfy called Bitten starring Laura Vandervoort as lead character Elena Michaels, the world’s only female werewolf. The show was named after the first book in the series, and while fans say the show sticks close to the first novel in the first season, Armstrong said she has not watched the show and likely never will.

“To see someone else’s version… I would have a hard time knowing if some of the minor things were mine or theirs,” she said.

The Women of the Otherworld includes an impressive 13 main series novels, as well as anthologies, two young-adult spin off series and multiple novellas. Armstrong has also written other series, including Cainsville, Age of Legends, The Blackwell Pages with young adult novelist Melissa Marr and the often forgotten Nadia Strafford series. She also has written for horror anthologies and has a few standalone novels to her name.

Her novels are known for featuring strong female characters and for utilizing romance as a subplot rather than the main storyline.

“I cannot imagine ever writing a book that has no romance at all, but I also can’t write just romance, it just doesn’t work for me,” she said.

Her novels stand out for having strong female characters, something that continues to confuse and frustrate Armstrong to this day.

She added that students should not be afraid to give writing a chance, even if they don’t have a degree in English or creative writing, adding that most authors she knows do not have one.

Her final words to Fanshawe students aspiring to be a writer may not be what they want to hear, but it’s realistic.

“Get a job that you enjoy. Do something that you like doing and make a living out of that while you’re writing,” she said. “The chances of getting out of school and selling a book… is an anomaly.”

The Letters and Arts Society will be hosting another free reading event with author Cara-Lyn Morgan on Feb. 18 and another with author Kamal Al-Solaylee on March 17.