The Forest City Derby Guys want you to join their pack 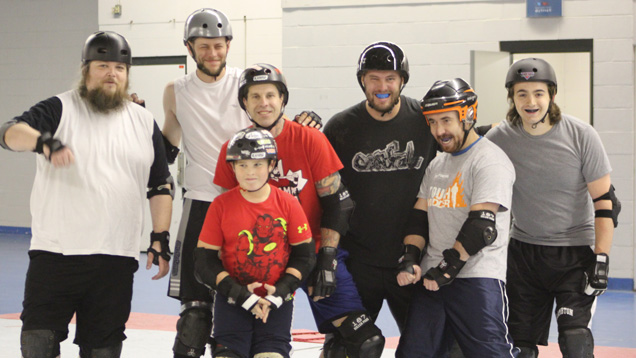 The Forest City Derby Guys may be a small team, but they make up for it with their spirit and determination.


It's 9 p.m. on a Monday night, and at the Western Fair Canada Building, the Forest City Derby Girls are pulling off their skates after another session of hard practice. The ladies may be heading home to put up their weary feet, but the lights of the arena stay on and an energetic hum lingers in the air, signaling that the night is far from over. One by one, the members of the Forest City Derby Guys emerge from their place on the sidelines to gear up for a spin on the track. It's their turn now.

For almost four years the London men's roller derby team, playfully dubbed the Pack Men, has been proudly skating alongside their better-known female counterparts. They are a small but mighty group, persistently doing battle on and off the track to achieve recognition in the recent movement of roller derby revival.

At the moment, the team is comprised of around 10 players, a dismal number when compared to the three rapidly growing teams of the Forest City Derby Girls. In order to organize tournaments, separate regional divisions must often band together just to create a regulation amount of participants on either side. Despite being an internationally played sport, men's roller derby is still relatively new to Canada and has some catching up to do in terms of advertising and cultural acceptance.

A key challenge faced by the Pack Men is gaining new recruits. According to team captain Chris Potter (Potty Mouth 101), lack of awareness and understanding is largely to blame.

“It's the backburner to women's derby. A lot of men don't look at it as a sport the same as they do with say hockey or football. But to be honest, it's the best sport I've ever played.”

Men's roller derby implements the same rules and complex structure as women's, but there is one specific difference to how the game is played. Without discounting the potential brutality executed by the women's teams, men's derby tends to be rougher than women's only because of their larger physiques.

However, the overall spirit of comradery and kinship transcends the bounds of gender binaries. After watching his wife play, David Sharpe (Giraffe) has been a part of the team for seven months. Already he is experiencing benefits mirroring those of the female players.

“I love how much of a family it really is. Whatever it might be, we're there for each other. We're from a thousand different walks of life, between a lawyer, a mechanic, a carpenter, a truck driver, a call-centre worker, when we're here, we're all equal.”

The men's team also contends with the same public misconceptions as the women's. Many sponsors often decline a chance to advertise at games, failing to see how they can possibly gain exposure at what they may feel is an unwatched sport. Potter insists that the event is actually one of the hottest tickets in town, for people of all ages.

“On a good night, we pack the stands with 300 to 400 people. These events are fully licensed and kid friendly. They have hula hooping and activities at half time. Live bands are usually playing. Science students from Western will have demonstrations. My son's been coming here for four years and has a blast every time.”

Players of men's roller derby may risk a raised-eyebrow or two, but at the end of the night, the Pack Men just want to have fun doing something as a team, gender politics be damned.

“It IS a girl's sport,” he stated matter-of-factly. “It's invented by women. But what's more progressive than feminists letting a bunch of dudes play a girl's game?”

From both the men's and women's teams, the message is consistent: roller derby is for anyone willing to test their limits and play. For more information on how to join, visit forestcityderbygirls.ca.