The Green Inferno: The controversial cannibal 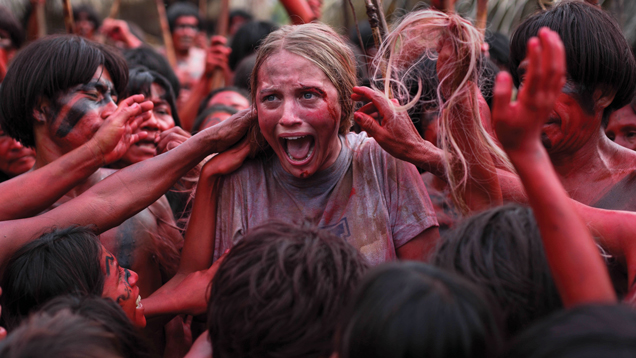 Eli Roth's The Green Inferno is an extremely controversial film that had to jump many hurdles in order to be released. Not only is it uncomfortable to watch due to the nature of the film, but also because it eludes to the bigger picture of how some westerners perceive new cultures.


For a brief time earlier this month, local movie theatres unceremoniously screened one of the most controversial films of the decade: Eli Roth’s The Green Inferno. Despite having been completed in 2013, Inferno’s mainstream debut was forced to contend with multiple delays due to hesitations from fickle distributors before finally being picked up by iconoclastic Blumhouse Productions.

While devoted horror fans are all too familiar with the cannibalism subgenre, it is no surprise that a large amount of financial risk was attached to how this intensely violent film would be received by less accustomed audiences.

The Green Inferno tells the story of a group of young American activists who ironically find themselves on the menu of the remote Amazonian tribe they initially advocated to save. True to the tradition of the cannibal horror genre, the movie’s marketing campaign deliberately hypes up the fact that the participating Peruvian tribe had never been filmed before encountering Roth.

In response to this, controversy was rapidly generated when indigenous people’s rights group, Survival International, objected to what they perceived to be the plot’s colonist connotations. While Roth was quick to defend his film, the issue has raised questions as to what purpose the movie could possibly serve in a progressive society.

Purely derived from myth, stereotype and general ignorance, images of the cannibalistic Rainforest tribesman can be traced back to sensationalized adventure stories relayed to the motherland by British explorers and colonists.

The trope became entrenched in a cultural mindset that has proven difficult to shake off in spite of years of post-colonial studies.

In the same way that other directors focussed on fictional monsters like zombies, vampires and witches, Italian directors of the ’70s and ’80s created films that perpetuated the lore of the Rainforest cannibal. Because these films were typically low budget and of poor quality, their subject matter was exploited as it was written to meet the desires of the most deviant and darkly curious viewers. This is how these movies managed to sell tickets and this is what makes them a part of the exploitation genre. Out of these films, Ruggero Deodato’s Cannibal Holocaust stands out as the most horrifically violent, and it is from this film that Roth drew his inspiration for The Green Inferno.

In order to recruit the film’s tribe and explain his intentions to them, Roth reportedly showcased Cannibal Holocaust, which was in turn met with great amusement by the group that had never even seen a television set before.

With their consent, their performances in the film are meticulously directed, while the American actors scream at them with comically forced fear. It is obvious that The Green Inferno was never meant to realistically depict actual Amazonian tribes. Yet the fact that the film was immediately perceived as such suggests an unsettling reality that certain symbols, images and stereotypes have not yet been expunged from the consciousness of a society that truly has no reason not to know any better.

Thinking of the tourists who overlook their destination’s economic disparity in Hostel, the theme of ignorance and its consequences seems to pervade Roth’s writing.

In Inferno, we see once again a group of privileged college students whose reasons for travelling to foreign lands are deeply rooted in self-indulgence and naiveté, rather than a willingness to fully understand what it is they are about to get into.

The Green Inferno is a useful film, deserving of strong-stomached and critically-minded audiences, as it directs attention to the way many westerners tend to perceive and interact with unfamiliar cultures.

As ugly as it can be to admit, hints of colonist conventions quietly linger on in the way we industrialize and travel. In its own brilliantly gruesome way The Green Inferno is a fine example of how a horror movie can jolt us awake from our own delusions of political correctness and First-World ideals. This is a movie that reminds us that there are still many flaws in our social attitudes that need to be brought into the open for examination. If we hide from them, we may become the next group of victims in Roth’s future films.