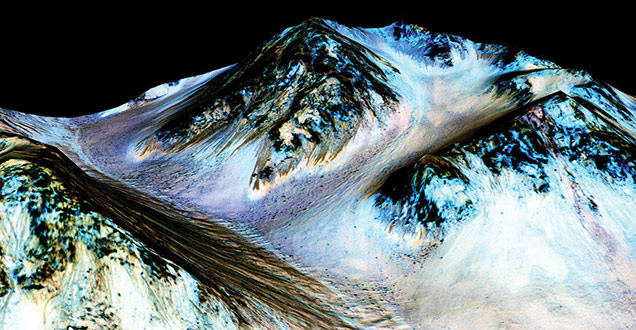 Credit: NASA/ UNIVERSITY OF ARIZONA
An image created by the High Resolution Imaging Science Experiment (HiRISE) camera showing what is believed to be evidence of flowing water in brown streaks coming down the mountainside.

Scientists from NASA have unveiled a historical revelation that changes how we view one of our neighbouring planets; the government organization in partnership with teams from Georgia Tech and the University of Arizona has found non-direct evidence of flowing water on the surface of Mars.

The revelation made on Sept. 28 came after years of studying several sets of images and spectrophotographic data taken from orbit by the Mars Reconnaissance Orbiter (MRO) in 2011.

The geographical features, known as Recurring Slope Lineae, are areas of mountain slopes around Mars’ equator, which appeared to grow in the planet’s summer season and recede back up the mountainside during winter, leaving trails noticeably darker than the surrounding soil.

What scientists think is happening is a process known as deliquescence. This is a process where a substance actually draws water from the air towards it; eventually dissolving itself into the water. This process is exemplified in the Atacama Desert of South America, partially used as a model for the researchers to base their hypothesis on.

The find is stunning simply because of the temperatures on the Red planet’s surface. The average temperature is negative 60 degrees C, but it has also reached as low as negative 125 degrees C on winter nights, with air pressure about a fifth as strong as that on Earth. But, like the Atacama Desert, there are areas on Earth where the same conditions occur.

The researchers hypothesize the water is trapped in the form of a brine-like mixture of perchlorates, salt compounds which are comprised of four oxygen atoms and one chloride atom as its base.

The news is sure to fuel interest and intrigue into the notion that life may have existed on the Red Planet at one point, and still might.

In fact, several studies have been published in the previous year, which showed in lab simulated conditions, that a number of bacteria could live in conditions similar to the Martian surface.

While not exactly the same conditions it’s not a stretch to think that bacteria could survive in the extreme conditions on Earth, such as the Atacama Desert, in numerous deep cave systems. Another example is to think of what can survive in between the cracks of solid rock kilometres under the surface of the Earth, both on land and at the Indian Ocean’s seafloor.

What none of these studies tested for is the ability for these bacterium to survive the daily radiation they would face, as Mars’ magnetosphere is much smaller than Earth’s, leaving everything on its surface susceptible to mutation or death.

But then again, Earth has bacterial and fungal species which thrive in intense radiation environments, as proven when workers found black growth around the Chernobyl reactor years after its initial clean up.