Be heard: London youth have a voice 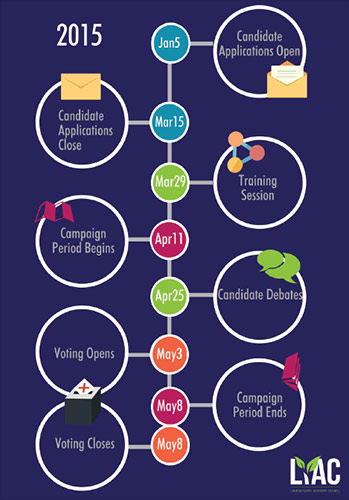 A timeline on the application process and next steps to be on the London Youth Advisory Council.


Youth in London have an opportunity to voice their opinions to the city as part of the London Youth Advisory Council (LYAC).

Applications for positions to represent each ward are now welcomed until March 15.

Emma Blue, elections co-ordinator for LYAC, says the councillors discuss everything from politics to social issues.

“We regularly have meetings where we discuss different issues within London,” she said. “Recently we’ve discussed drug abuse, food trucks within London. We’ve talked about Orchestra London and high art. We’ve had discussions about the police budget.”

All of these discussions encompass London’s youth.

“Within the downtown revitalization discussion, we talked a lot about what an ideal downtown would look like for youth,” Blue said. “Or what issues we have to consider when you are creating a safe and healthy space for young people and what they need versus what adults may need like public parks and playgrounds.”

The discussions are a key component to being on LYAC.

“It’s a lot about bringing everyone’s collective voices and having a shared mutual conversation,” Blue said. “Also talking specifically about the youth perspective and what youth may need in these things.”

Having the council in London provides a safe space for young people to voice their mind, learn about others’ opinions and learn how to be leaders in their communities.

Blue says members of the LYAC do learn a lot from being on the council including:

• How to facilitate a challenging and engaging discussion

• How to interact with the community and community leaders

• How to campaign and talk to voters

• How to get input from youth within wards

• How to respect outside opinions

• How to respect someone

“You feel like no matter what you do in there you make a difference,” he said. “I hang around like-minded people who are in politics and interacting with various community leaders and regular citizens.”

Richards – who will be running for re-election – says it’s been interesting to meet people who enjoy talking about the same things.

“It’s really mind-boggling that there’s a group of young people who talk about politics,” he said. “The stereotype is that young people are very apathetic, but it’s also a stigma that youth would rather be talking about something else.”

Richards says talk about transit, the environment, drug use and the downtown are samples of what is discussed at LYAC.

He encourages his peers to run for positions in their respective wards.

Only young people between ages 15 and 25 can apply will be invited for a day of training on March 29, where they will learn how to campaign and talk to voters.