Novels to look forward to this winter 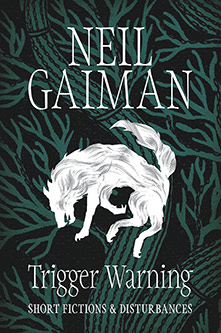 A third collection of short stories by Neil Gaiman, Trigger Warning includes previously published short stories - even something written for Doctor Who.


WATERLOO (CUP) - Whether you read for pleasure or you read because you’re stuck indoors due to snow, chances are you’re looking for a new book to read for your next snow day. Here’s a short list of new releases:

Binary stars are systems of dual stars that orbit around a common center of mass. If the stars are close enough, matter can be transferred through tidal forces, which may boost the stars’ evolutions to stages that are unattainable for single stars. In Binary Star, Sarah Gerard reflects the relationships of these star systems onto the lives of two long-distance lovers whose addictions and illnesses fuel each other’s weaknesses.

The book is a novel-length prose poem in which the narrator, a young woman struggling with anorexia and inundated with her alcoholic boyfriend, spins through a deploring culture and glorified articles of “quick fixes” in tabloid magazines that reinforce their sicknesses.

Created as an experiment by the goddess Pallas Athene, the Just City is an approximation of Plato’s Republic set on a Mediterranean island and populated by over 10,000 children, a few hundred scholars and philosophers from across time and robots from the far future. Through discussion and compromise, the society is set up as community where every soul is free to strive for excellence.

Told from the perspectives of a bluestocking from the 1800’s, an Egyptian farmer’s daughter and a reincarnated human Apollo, The Just City explores concerns of power, free will and equality inside a rigorously structured society of Plato’s imagined utopia.

Trigger Warning: Short Fictions and Disturbances is New York Times bestselling author Neil Gaiman’s third collection of short fiction. The anthology includes previously published pieces of short stories, a Doctor Who piece written for the 50th anniversary of the television show as well as “Black Dog,” an original story set in the world of his novel, American Gods, written exclusively for this collection.

At just eight years old, Kenya Curtis feels the growing isolation of her “otherness” in her unconventional upbringing. Despite attending a school that is populated predominantly by black children, she is singled out for her peculiar blackness – she, unlike the other kids, celebrate is Kwanzaa and is forbidden from reciting the Pledge of Allegiance. In a cutting portrait of Philadelphia in the late ‘80s and early ‘90s, Disgruntled follows Kenya’s coming-of-age in a story that explores the double-binds of race while highlighting the ways in which religion, class and race tangle with one girl’s journey from childhood to adolescence.

A Darker Shade of Magic

Set in a series of parallel universes, A Darker Shade of Magic details a series of fantastical versions of London: dirty and boring Grey London, ruled by King George and lacking in magic; the flourishing empire of Red London, where magic is revered; White London, where the throne is claimed through bloodshed and magic drains the city to its very bones and the unspeakable Black London.

Kell is a Traveler – a magician who can travel between parallel universes – and the adopted Prince of Red London who is in charge of communication between the royals of each London. On the side, Kell smuggles those who are willing to pay for a glimpse of an unknown world.