Cinema Connoisseur: Ice skating film will have you on the edge of your seat 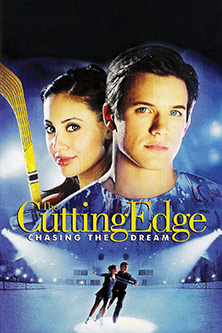 The week of March 11 saw London play host to the World Figure Skating Championships, and all I can say about that event is, “wow!” So many unforgettable moments — like the gold medal performance — I didn't see that one playing out like it did. What about the judging situation? Some felt one way about it, while others felt another way. It was a remarkable event that went off without a hitch... except for that one situation, you know the one I'm talking about. The less said about it, the better.

Kudos to our city leaders for bringing this big-time event to the Forest City. I'm sure next time city council convenes, plenty of n-words are going to be thrown around, like “Nice job, everyone,” “Not too shabby,” and “That was neato!” I hope our local politicians do something nice for themselves, like maybe they could all go out to a buffet lunch and let the taxpayers pay the bill to show our gratitude.

The movie was definitely a gold-medal winner, and it spawned three sequels. I recently had the pleasure of watching the third installment, the 2008 masterpiece The Cutting Edge 3: Chasing The Dream. In this latest chapter of the saga, we are introduced to the sizzling pair of Zack and Celeste. They were once an item off the ice, and are forced to keep up the façade for the purposes of their career. The magic is gone between them however, both on ice and off. When and accident befalls Celeste, Zack looks outside the box to find a replacement.

In a clever twist on the plot of the original film, Zack recruits female hockey player Alejandra Delgado to take over for Celeste. Now this might seem a little far-fetched — I mean, a female hockey player, come on! I've reviewed films about trolls, killer robots and secret-agent chimpanzees, but I have never heard of something so preposterous.

I was able to see past this, however, and enjoy the film for what it is: one of the greatest sports films ever committed to celluloid. Zack sees the potential in Alejandra, but his coach does not think they have enough time before the championships. This leads to all sorts of drama between Zack and his now former coach, Zack and his ex-partner Celeste, and Zack and Alejandra. Not only do Zack and Alejandra have to work on becoming a well-oiled machine, but they must also try to block out all the distractions around them. The biggest distraction of all turns out to be the love between them.

When one thinks of the sport of figure skating, certain words come to mind, such as elegance, beauty and grace. All of these terms can also be applied to The Cutting Edge 3. My scorecard for this film would contain no deductions, and top marks for performance and execution.