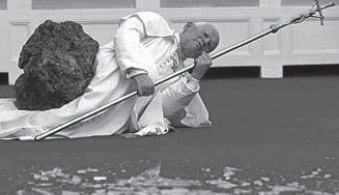 The satirical sculpture, La Nona Ora (The Ninth Hour), depicting the Pope John Paul II struck down by a meteorite was crafted by Maurizio Cattelan, an Italian artist.


Editorial opinions or comments expressed in this online edition of Interrobang newspaper reflect the views of the writer and are not those of the Interrobang or the Fanshawe Student Union. The Interrobang is published weekly by the Fanshawe Student Union at 1001 Fanshawe College Blvd., P.O. Box 7005, London, Ontario, N5Y 5R6 and distributed through the Fanshawe College community. Letters to the editor are welcome. All letters are subject to editing and should be emailed. All letters must be accompanied by contact information. Letters can also be submitted online by clicking here.
About a year ago I visited New York City and discovered that at the time the famous Guggenheim Museum had on display the art of Maurizio Cattelan. One of his most wellknown pieces is a sculpture of Pope John Paul II.

The sculpted pope is down on a floor of red carpet. He is clutching his staff with a crucifix on it. His eyes are closed, and he grimaces in pain. A black object representing a meteor pins him down. The name of the work translates as The Ninth Hour. The ninth hour is the hour of the death of Jesus Christ (just short of 2,000 years ago) as one of his biographers recorded it. So, I guess this is the pope's death, death by falling meteor, death by a non-existent God.

During my visit my brother asked me if I wanted to view the exhibit that included The Ninth Hour. I opted to go elsewhere. It seemed to me that going to pay homage to the creator of that piece would be like joining him in kicking someone when he's down, that someone in this case being the pope.

The pope has legitimacy of the highest sort for the world's 1.2 billion Roman Catholics. For non-Catholics, who can more easily indulge in anti-papal feelings, he has far less. Many treat the papacy as an object of derision. Like Cattelan, who has through his art chastised many authority figures (perhaps not himself, though), many feel that the pope, the leader of the “largest corporation” as some focusing on the Catholic Church's structure and membership put it, the largest religious body in the world, deserves all the ridicule that the critics of the Catholic Church heap upon it.

Like the Pope and all Catholics, I am part of the Christian community. At the same time I have questions about the Catholic understanding of the authority of the pope. I can't take credit for coming up with them; they have been around a long time.

One of the main questions I have goes like this: the Catholic community claims that the pope is the direct successor (not by birth but by the choice of the church and the Spirit of God) of the most important of the disciples of Jesus. His name was Peter. The name (in Greek) means “rock.” Jesus once said, “Upon this rock I will build my church.” Peter, according to Catholic tradition, became the church leader, the bishop, of the church in Rome. And ever since then the bishop of Rome, the entire line of 265 of them thus far, has been the head of the church (again, according to Catholic tradition).

But with much respect, is this how Jesus would have meant his statement to be used? It is interesting to notice that Jesus said, “Upon this rock I will build my church,” right after Peter declared that Jesus was the Messiah, the one sent by God to lead the people. Peter, in other words, was declaring his conviction about who Jesus was. He was affirming the identity of Jesus the Messiah, the one who would renew the faith of the Jewish people and who would draw countless non-Jewish people to the true God.

It seems to me that by “rock” Jesus was making a word-play with the name Peter, implying the concept of a rock-like foundation for his church. But the foundation was not a person; it was the declaration of faith Peter made. The church, the community of the people of God, is not founded upon a disciple, Peter, and his successors. It is founded upon a living faith in Jesus Christ.

This is why, contrary to the understanding of my Catholic friends, full-fledged Christian communities can rise up and thrive quite apart from any formal, structured, connectedness with the Roman Catholic community. They have. And they will continue to do so.

Nevertheless, even though Mr. Cattelan disapproves, may the retiring pope continue to receive the respect and graces due to him. And likewise, his successor. And may that successor repair some of the divisions that have undermined the global church, perhaps beginning by (re)opening a discussion with non-Catholic Christians about the legitimacy of the papacy.