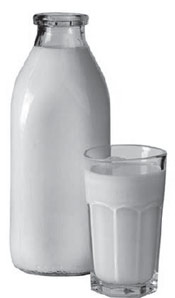 Milk, does it do a body good?


Editorial opinions or comments expressed in this online edition of Interrobang newspaper reflect the views of the writer and are not those of the Interrobang or the Fanshawe Student Union. The Interrobang is published weekly by the Fanshawe Student Union at 1001 Fanshawe College Blvd., P.O. Box 7005, London, Ontario, N5Y 5R6 and distributed through the Fanshawe College community. Letters to the editor are welcome. All letters are subject to editing and should be emailed. All letters must be accompanied by contact information. Letters can also be submitted online by clicking here.
Isn't it strange that humans are the only species that continue to drink milk throughout adulthood? The marketing industry does a very good job at advocating the consumption of milk and dairy products without any mention of its negative health-related risks on both humans and the cows. Considering the harmful additives to dairy and the way the cows are mistreated, we must address this issue ethically.

One thing we must consider when drinking cow's milk is that the milk is designed to turn an 80-pound calf into a 1,000-pound cow in one year. According to an article called Milk and Human Health by Doris Lin, “That amount of protein and hormones is not only unnecessary, but unhealthy for humans.” Milk is also high in saturated fats and cholesterol, which can increase the risk of heart disease.

Ganmaa Davaasambuu, a physician and working scientist at Harvard School of Public Health, states in a Harvard University Gazette article entitled “Hormones in milk can be dangerous” that there may be a correlation between cow's milk and hormone-related cancers (cancer of the testes, prostate, and breast). “The link between cancer and dietary hormones — estrogen in particular — has been a source of great concern among scientists.” This is a serious issue because dairy is responsible for 60 to 80 per cent of estrogens consumed (read more at http://www.news.harvard.edu/gazette/2006/ 12.07/11-dairy.html).

One study that compared diet and cancer rates in 42 countries showed that there may be strong correlations with testicular cancer among men aged 20 to 39 and milk and cheese consumption. There is also a correlation with prostate cancer and dairy consumption, “In the past 50 years in Japan, rising rates of dairy consumption are linked with rising death rates from prostate cancer — from near zero per 100,000 (people), five decades ago, to seven per 100,000 today,” Davaasambuu stated. Another study with rats also showed startling results. Rats fed with milk showed higher incidences of cancer and tumors compared to rats fed with water, she continued.

Lin stated that there is a hormone that is administered to cows that increase milk production by 20 per cent, but also increases the production of Insulin-like Growth Factor 1 (IGF-1). It is called recombinant bovine growth hormone (rBGH) and is banned in Europe. The Cancer Prevention Coalition states, “It is highly likely that IGF-1 promotes transformation of normal breast cells to breast cancers.” These issues should raise awareness that milk may be strongly correlated with cancer, primarily hormone-related cancers.

Not only are humans affected, but cows also suffer by the large demand of dairy. The life of a cow ‘behind the scenes' can be quite cruel and violent. People don't usually lend a thought to what actually occurs to the animals on a farm that are being used for income. Upon birth, calves are usually separated from their mothers right away and put in separate cages depending on their sex. Males will be raised and slaughtered for meat while females will be raised for dairy purposes, according to veganpeace.com.

Some cows end up in the veal industry. Veal calves are doomed to experience a very short life confined to crates and chained up to minimize movement (as to allow for their meat to be tenderer). After about four months, these calves are then slaughtered.

People may ask how or where they can get calcium if not from milk. Dark green, leafy vegetables like broccoli, turnip greens, kale and spinach are fairly rich in calcium. Another source of calcium can come from almonds and soy products, according to Office of Dietary Supplements in the U.S. National Institutes of Health. Cow's milk may be high in calcium and protein, but, as Lin quotes “Dr. Food” Kerrie Saunders, “North America has one of the highest consumptions of dairy products, and also the highest incidence of osteoporosis.” Excess protein in our diets may cause calcium to leach out of our bones. Lin cites a 1997 study by the Harvard School of Public Health that found that an increased consumption of calcium by calcium-rich foods like dairy did not decrease the risk of osteoporotic bone fractures.

While milk and dairy products may be promoted and advertised as healthy and fun for commercial purposes, people should be aware that it's a business and concerns for health isn't a top priority for these companies. People should become more aware of the negative health impacts of milk and dairy products. Also, people should address this issue in a more ethical manner in consideration for the well-being of these peaceful, innocent animals that have provided for us for untold millennia.

Andrew Bureau is a Fitness and Health Promotion student at Fanshawe College.