Fun and Fitness: Age is just a number 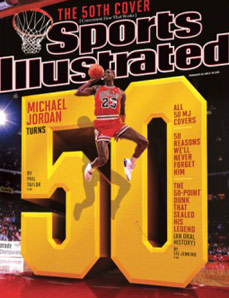 CREDIT: SPORTS ILLUSTRATED
Michael Jordan dunks like the champ he is on the cover of Sports Illustrated.

A weekly shipment of magazines just got unloaded into the J building, which happened to include the latest Sports Illustrated magazine. Sorry, guys, it wasn't the swimsuit edition that I am referring to. This issue has a scrawny kid donning a Chicago Bulls #23 jersey and just so happens to be flying from the free throw line for a timeless dunk. If you do not know who I am talking about, then I am officially “old.”

Michael Jordan just turned 50 last month, and for those of you who were born yesterday, he is arguably the greatest basketball player of all time — some have gone as far as to argue that he is the greatest athlete of all time. With the countless highlights, records and career achievements, there are definitely strong arguments to support these “greatest of all time” debates. I am all too familiar with the Jordan accomplishments and accolades. However, people often forget that Jordan played in three different decades. With two separate comebacks and three retirements throughout his career, it is interesting to take a retrospective look at the contrasting ages in which Jordan competed.

First came the high-flying, shortshorts- wearing MJ of the '80s who dominated the league with sheer athleticism and a cold-blooded competitive spirit. Then came the early '90s MJ, where athleticism and knowledge and experience met at a peaking point, resulting in the greatest incarnation of Jordan to ever grace a basketball court. After a brief retirement, we witnessed the first return of MJ, who managed to win another three championships at the ages of 33, 34 and 35. Many fans like to pretend that he didn't come back for his last hurrah at the ages of 38 to 40. Sure, Father Time had taken his toll, and Jordan clearly wasn't the player that he used to be. But putting up special game nights such as 51 points at age 38 and 43 points at age 40 showed us that even time couldn't stop the master of the game.

Sports analysts have begun debating as to whether or not Jordan could still score in double-digit figures if he were to come back to the NBA at age 50. I think the majority of us know that until he is in a wheelchair, he'll be able to accomplish this. Getting “old” really is a relative term and depends on who you ask. There are many athletes who have done some incredible things at ages that were deemed “past their prime.” Randy Couture of the UFC, Jack Nicklaus of professional golf, Gordie Howe who played late into his 40s in the NHL, Nolan Ryan who played 27 seasons in the MLB, and George Foreman who won the heavyweight boxing championship of the world at age 45 are just a few athletes who also flourished late into the twilight of their careers.

As I was saying, age is a relative term. While some individuals are busy having midlife crises, others are peaking, whether it's professionally, spiritually, athletically, or a combination. Excuses are relative, too. If we are too busy making excuses at the ages of 18, 19 and 20, then I'm sure reaching 40 will give many of us the much-needed wake up call to realize how trivial such excuses really are. For many, this is of no concern as they have developed championship mentalities from the get-go. As for the rest, at best, we can only hope they realize this before it's too late.

Fanshawe FC: CSL could be on its last legs