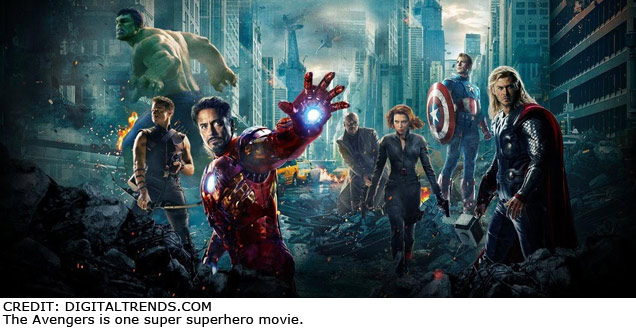 Ever since Nick Fury walked onscreen post-credits in 2008's Iron Man to tell Tony Stark he wanted to talk to him about the Avenger initiative, audiences everywhere have been waiting anxiously to see the Marvel superteam come to life. Well, the wait is finally over and The Avengers certainly lives up to its larger-than-life expectations.

In Iron Man, we saw Tony Stark go from spoiled rich kid to genius superhero. In The Incredible Hulk, we watched as Dr. Bruce Banner became the unfortunate victim of an experiment gone terribly wrong. Captain America showed a scrawny kid turn into a super-soldier and then frozen in time. Finally, Thor gave us a glimpse into a world where gods clash on Earth. And so the stage is set for The Avengers.

The Avengers brings together threads from both Captain America and Thor for its villains and their deadly plot. Loki, Thor's brother, has brought an army of aliens to Earth and is using the Tesseract, the weapon used in Captain America, to bring about the destruction of the planet. Luckily, Nick Fury (Samuel L. Jackson) calls in the big guns and assembles a team made up of Iron Man, Thor, Captain America, Bruce Banner, Black Widow and Hawkeye, whose mission is to save Earth from its impending doom.

The cast of The Avengers is pretty much as good as it gets in the land of movie superheroes. Jeremy Renner, who fans will remember from his role in The Hurt Locker, plays the badass archer Hawkeye, who spends half of the movie brainwashed by Loki and fighting for the bad guys. Then there's Scarlet Johansson as Black Widow, the femme fatale introduced in the second Iron Man movie.

Samuel Jackson is back as Nick Fury, the director of S.H.I.E.L.D., and as always, Jackson is a fan favourite onscreen. Tom Hiddleson is back in his role from Thor as Loki, Thor's brother, whose misguided views on life have led him to want to destroy Earth. In a surprising yet absolutely entertaining role is Cobie Smulders (whom you will all know from television's How I Met Your Mother) as Nick Fury's right-hand woman, Maria Hill.

But the highlight of The Avengers casting lies in that of the superheroes themselves: Robert Downey Jr. as Tony Stark/Iron Man, Chris Evans as Captain America, Mark Ruffalo as Bruce Banner/The Hulk and Chris Hemsworth as Thor. Each of these men gives an outstanding and thoroughly entertaining performance, creating the perfect onscreen ensemble. Special note must be made of Downey Jr., though, as his witty, wry comedy stands out and will have you chucking through the whole movie.

All things considered, The Avengers was an outstanding movie. Sure, there was a long wait and there was an awful lot of hype and build-up surrounding it, but in no way does this epic superhero flick fail to meet expectations.