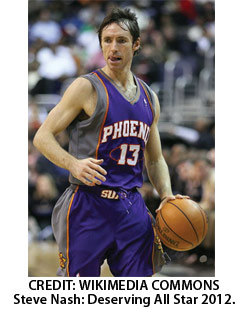 Born in 1974 in far-away Johannesburg, South Africa was a person many people would grow to love. That is Canadian basketball player Steve Nash for you. He may be 38 years old and on the verge of retirement, but he's been a top basketball player throughout his career. I'll begin by sharing an anecdote with you: NBA 06 had a demo that featured Miami and Phoenix. You got it: that is where I came across this 6-foot 3-inch player who impressed me. True, it was a video game, but when you look at his stats and his dedication, it paints a clearer picture.

"My heroes were Isiah Thomas, Michael Jordan and Magic Johnson. I think they were just so competitive and creative. Especially Isiah, he was somebody that wasn't very tall. He had played the game mostly on the floor and it made me feel that I could find a way to do the same." These were words by Nash when he reflected on his amazing journey back before the 2007/08 season. True, it's been an amazing journey for one of Canada's best basketball players of all time. He's scored over 16,000 points in his 15-year career, but the thing that he's remembered for a lot is his dedication. "I think they (his family) are really proud. I think they realize how hard I worked. They saw me going out there and shooting all hours of the days and night, shooting in the rain, dribbling in the garage. They realize how much time I put into it. I think that they are proud, not so much that I made it, but more because they know it took a lot of hard work," said Nash in the same interview.

Not many people are aware of this, but Nash suffers from a medical condition called spondylolisthesis. That condition causes muscle and back pain and is the reason why he always lies on his back when he's on the bench — to prevent his muscles from stiffening. Yet his grit and determination have given us plenty of reason to celebrate his career. The two-time MVP was recently voted to the 2012 All-Star Game, which would be his eighth appearance. Phoenix has not been playing well at all this season — they sit 13th in the West — yet Nash is an All-Star once more. I don't think it's necessary to mention why; that fact is easily summed up when you read stats and look at the effort he's been putting in at each game. People were predicting an appearance at the All- Star Game for Nash, so you can hardly say that you are surprised. It was on its way, and I am one of those people who's waiting to see Nash link up with Blake Griffin and Kevin Durant on the courts in Orlando on February 26.

Another talking point for many is whether Nash would agree to move from Phoenix. He's clearly the franchise player over in Phoenix, but a championship ring has eluded him all his career. That debate is ongoing, but one thing is certain: whatever the outcome be, Steve Nash will always be remembered as one of basketball's greats.

Love, Lust and Lies: Have a dream vacation, not a nightmare