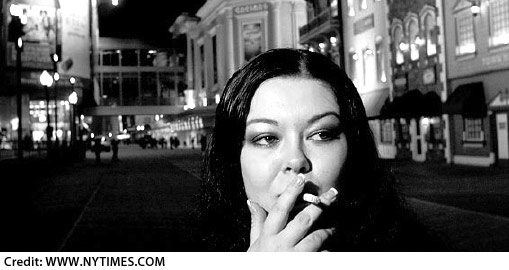 Cigarette smoking is an addiction with serious consequences to our society. No matter where you go in the world, smoking is one of the leading causes for illnesses such as lung cancer, cardiovascular diseases and respiratory diseases. Not only does it affect the smoker, it also affects the people around him or her, and secondhand smoking increases the risk of heart diseases. The cost of smoking negatively affects the smoker's personal lifestyle, society's medical care and the country's productivity. Therefore, smoking should be banned entirely.

Smoking is one of the worst things people can do to their bodies. Cigarette smoke contains over 4,000 chemicals, with over 40 of them being known carcinogens (L. Johnson). Between one-third and half of all cigarette smokers will die because of their smoking, and yet it is one of the most preventable causes of death (Doll and Peto). Epidemiological studies have proven that there are strong relationships between cigarette smoking, atherosclerosis burden and cardiovascular disease events; about onethird of smoking-related premature deaths are due to cardiovascular diseases (H. Johnson, et al). Smoking leads to disease and disability, causing cancer, heart disease, strokes and lung diseases that could include emphysema, bronchitis and chronic airway obstruction. For every person who dies from a smoking-related disease, 20 more people suffer with at least one serious illness from smoking (Centers for Disease Control). Even though the active and passive harmful effects of smoking are well known and undeniable, the number of people smoking is far from declining. It is spreading quickly among young people in particular, affecting their health and well-being.

Smoking in the car is a hazard, and not just during the time in which one is smoking. Because the upholstery and carpeting absorb the smoke, it is slowly released into the air during future car rides. Additionally, the smoke released from the interior surfaces of the car is then taken in through the skin. For adult non-smokers, secondhand smoke exposure causes an estimated 46,000 heart disease deaths and 3,400 lung cancer deaths annually in the United States (Centers for Disease Control). People need to realize that they are not just gambling with their own health, but they are putting their family and friends' health at risk. Non-smokers have to pay close attention to the air they are breathing because the smoke around them can have some serious consequences that can affect their lives forever.

Smoking is not only costing users their health, but it is also a major cost financially for both the user and society. Smoking affects children indirectly; parental smoking has an impact on the family's income, financial resources and a child's upbringing and career choice. U.S. consumers spent an estimated $90 billion in 2006 on tobacco products (Centers for Disease Control). The addiction is so strong and compelling that poor people spend up to 20 per cent of their income on smoking (Haustein). Due to the strength of the addiction, many families will go into serious debt from which the children suffer. Many children will go without meals, clothes and in some of the worst situations, school. Consequently, these children will be unlikely to get a post-secondary education, due to their poor health and irregular school attendance.

Smoking plays a pivotal role in society, especially in financial terms. Whether it is the cost of medical care, advertising, promoting, marketing, manufacturing or the loss of productivity, the world is paying large amounts of money to support and to encourage an injurious addiction. In 2006, U.S. cigarette companies spent $12.4 billion on advertising and promotional expenses, $34 million per day on marketing and $354 million on smokeless tobacco advertising and promotion (Centers for Disease Control). Smoking is a profit-oriented business, where each company strives to make as much money as possible.

Cigarette companies and smokers will argue against any form of banning tobacco. These companies only care how much money they are acquiring or losing, not about the health of others. Smokers fight against the thought of banning smoking because they feel as if a "right" has been taken away from them. They often do not believe there is any harm involved, and they would also have an addiction to conquer. During 2000 to 2004, cigarette smoking was estimated to be responsible for $193 billion in annual health-related economic losses and resulted in 5.1 million years of potential life lost in the United States (Centers for Disease Control). The health and cost problems which smoking creates could be eliminated if tobacco was banned.

In summary, our society would be a much better place, both health-wise and financially, if the smoking of tobacco was banned. Too many people are going into debt, spending savings, ruining future possibilities, risking their health and shortening their lifespan. Smokers may choose to do what they like with their lives, but to affect others as a result of their choice is not acceptable. The user affects the world around them, whether it is their own family or strangers. Families and children are going without essentials, medical care costs are booming, society's health is decreasing, air pollution is increasing, lifespans are shortening and diseases are on the rise — this is all caused by users' choice to smoke. What will it take for the world to see that tobacco is slowly but surely killing the world we live in? Society is only letting small problems become greater problems for the generations to come.

The government should use all the tax revenue from current tobacco sales to fund awareness campaigns, smoking cessation programs and to help tobacco farmers exit the industry. The sale of tobacco should be banned and healthy lifestyles promoted. What smoking does to the health, economy and well-being of our country is nothing short of barbaric. Humanity contends the world is an advanced civilization — it is time to live like it.

Johnson, Len. "Chemicals in Cigarettes." QuitSmokingStop. 9 March 2011.
Editorial opinions or comments expressed in this online edition of Interrobang newspaper reflect the views of the writer and are not those of the Interrobang or the Fanshawe Student Union. The Interrobang is published weekly by the Fanshawe Student Union at 1001 Fanshawe College Blvd., P.O. Box 7005, London, Ontario, N5Y 5R6 and distributed through the Fanshawe College community. Letters to the editor are welcome. All letters are subject to editing and should be emailed. All letters must be accompanied by contact information. Letters can also be submitted online by clicking here.

Life Meets Faith: The U2 Church