Bringing an end to bullying 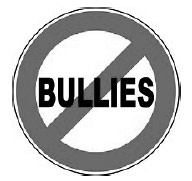 Teasing. Picking on. Putting down. There are many different terms to describe bullying, and it seems as though most people have been involved with it at some point during their educational experiences. Sometimes thought to be a problem that only elementary and high schools face, bullying is also a problem throughout colleges and universities, although the face of bullying at this level can look vastly different.

For college students, bullying doesn't generally involve namecalling, stealing lunch money or pushing someone down in the schoolyard; instead it often involves roommate disputes. Many people who have lived with someone other than a family member have at least one or two "horrible roommate" stories, and while sometimes it can seem funny after the fact that your roommate was messy or loud, some unlucky students deal with roommates who make their living space a nightmare.

If you're looking for a different kind of help, maybe someone just to hear you out and listen to your troubles, the Fanshawe Student Union has its doors open. "What the Student Union does is provide outreach for students," said FSU President Veronica Barahona. "We can tell students where they need to go on campus to get help." Barahona stressed that collegelevel bullying is very different than it is within the elementary and secondary school systems, which is why many students who are faced with bullying in college do not know where to get help.

"Any bullying within Fanshawe is unacceptable; we have a zero tolerance policy," she explained, adding that along with housing mediators, the Student Union offers "a VP of Academic Affairs, who can help with appeals. We also give help in dealing with the student code of conduct." Above all, Barahona said that students should "come to the Student Union — just come right into the office and talk to someone. We are all students here, too, so we understand what it's like."

While the FSU works to stop college-level bullying, the Thames Valley District School Board is instituting a new program called The Pledge to help end bullying within its schools. According to TVDSB Public Affairs Officer Julie Maltby, "The Pledge is really the crux of bringing an end to bullying across Thames Valley."

The Pledge came about after the Director's Community Task Force was formed in 2010 in an attempt to find ways to end bullying in the public school system. What the task forces found was that more attention needed to be given to the task to bullying awareness, and so The Pledge was created.

The Pledge campaign is exactly what it sounds like: a pledge taken by students that states, "I believe that everybody has the right to live in a community where they feel safe, included, valued and accepted regardless of differences. I pledge to be respectful of others and stand up against bullying whenever and wherever I see it." The website for this initiative, ctvlondon.ca/thepledge, will go live on September 12.

Fulfilling students' needs from A to Z

Your year to succeed