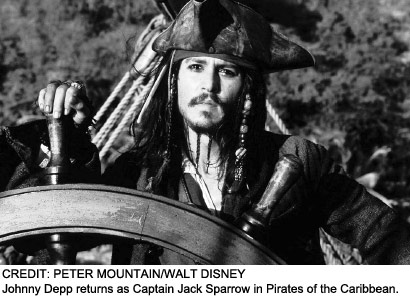 Pirates of the Caribbean: On Stranger Tides (2011)

Captain Jack Sparrow is back for yet another adventure, attempting once again to find the secret to immortality in Pirates of the Caribbean: On Stranger Tides, the latest installment from director Rob Marshall.

The story picks up more or less where the third installment left off. Captain Sparrow is in search of the fountain of youth, as are Captain Barbossa and the "pirate that pirates fear," Blackbeard. Barbossa, now apparently sailing for the King's Navy, races against Blackbeard and his imprisoned crewman Sparrow, as well as the Spanish Fleet, to find the fountain and obtain all the components necessary to complete its ritual. Two silver chalices from Juan Ponce de Leon and the tear of a mermaid are necessary to transfer all the years of one person's life to another. As the various crews race towards the fountain, it becomes apparent that Barbossa is set upon killing Blackbeard, who has taken from Barbossa both a leg and The Black Pearl. It also becomes clear that Blackbeard is the most cunning and deceitful of all pirates, and that mermaids are vicious killers who do not cry tears of misery or pain.

What more can be said for Johnny Depp's commitment to Jack Sparrow? Depp brings the quirky and enigmatic pirate to life flawlessly once more, providing nearly constant laughs as well as a brief look deeper into Sparrow's emotions.

Returning as Depp's inspiration and Sparrow's father is Keith Richards in a quick stint as Captain Teague.

Geoffrey Rush returns as the deceptive Barbossa, who desires nothing more than revenge. Rush is a cinematic gem — always entertaining, even as a crass pirate.

Penelope Cruz is Angelica, an old lover of Sparrow's and longlost daughter of Blackbeard. Cruz is charming in her role, if a little flat performance-wise, bringing not much more to the table than a beautiful face and sultry accent.

The brutal Blackbeard is portrayed by Ian McShane, a talented Brit whose strength lies in playing villains. McShane is terrifyingly evil, and every moment he appears onscreen, an unsettling atmosphere fills the theatre.

Also returning from the original trilogy is Kevin McNally as Gibbs. Two memorable newcomers are Phillip Swift, the missionary taken captive by Blackbeard, and Syrena, the mermaid from which the pirates scheme to extract a tear. They are played by Sam Claflin and Astrid Berges-Frisbey, respectively.

The effects in Pirates of the Caribbean: On Stranger Tides quickly become overwhelming. The camerawork alone is dizzying, as the camera never remains stationary for a moment. The addition of 3D effects only detract further from the enjoyment of viewing the flick, as they prove more nauseating than entertaining. The amount of supernatural magic in this installment takes away much of the fun of the pirate adventure and creates something else much less pleasurable to watch.

With a plot that seems to be grasping at straws and a cast who, while undeniably talented, have worn out their welcome as the characters, Pirates of the Caribbean: On Stranger Tides is simply a perpetuation of a franchise and unfortunately not an entertaining film.

Reel Views: The God of Thunder arrives with a mighty bang