Love him or hate him Sid delivers the goods

Joshua Hoffman Sports & Leisure February 8, 2010
“Hockey, hockey is our game. But really it's much more than just a game. It's a passion that brings us all together.” - Sidney Crosby, 2010 Tim Horton Timbit's commercial.

If you ever want to hear a stupid discussion, jump on London Transit. I'm not implying that everyone who rides public transportation in the Forest City is a moron by any means. However, you are more likely to hear: “That Pants On The Ground dude from American Idol is absolutely hilarious” than “The U.S. Senate voting to give Ben Bernanke a second term as Chair of the Federal Reserve is completely bogus,” come up in conversation. It's just the way it is.

Hearing all this is a part of the everyday grind. You either get a good laugh out of it or you take it with a grain of salt. However, there is nothing funny (and no grain of salt big enough) to endure what I overheard the other day: “Sidney Crosby is the most overrated player in the NHL.”

I'm not a Crosby fan and I didn't get involved in the conversation, frankly because I cannot stop listening to Arctic Monkeys on my iPod.

I got home. Ate dinner. And for some reason I couldn't stop thinking about it.

This man's justifications. “He's a pussy!” “He's a bad captain!” “He's not as good as everyone thinks he is” (which I think was the original argument reiterated) and how he would take other players such as Alexander Ovechkin or Joe Thorton over Sid the Kid any day. 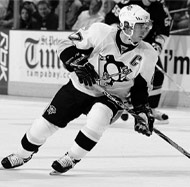 This article is not a jab at my friend on the bus who was clearly a hockey fan. This article is a reminder to all hockey fans to why they love the sport, and the reason just happens to be Sidney Crosby.

To be fair, there needs to be a rebuttal to the original argument.

The 22 year old Nova Scotia native is the youngest captain to ever hoist the Stanley Cup. This of course is after helping lead the Pens with 31 playoff points to their successful avenge against the Detroit Wings.

After accomplishing such a feat, Sid declared there was still room for improvement, believing he needed to work on his shot. As a result, he is a top the league in goals this season.

Have you heard of “The Plays of the Week?” You're certain to spot Crosby for a quick clip. The man is, to say the complete least, phenomenal. After finishing this season, his fifth, Crosby could quite possibly have 500 pts.

Crosby is entertaining every shift. Any hockey fan reading this article would want him on their side and some even cheer for him when he's playing against them. He has unreal skills that make it seem like you're watching fiction. Though he does get criticized for being dramatic on the ice, letting his emotions excite him; that just displays his passion and it only adds to the game. How many times have you been too excited and spilled your beer jumping off the couch in celebration?

Hockey is that thought inside your head saying, “Wouldn't it be amazing, getting up every day and doing something you would love to do?”

As far as I know Crosby doesn't run an illegal dog fighting ring. He hasn't shot himself in the leg nor has he brought guns into the Pittsburgh Penguins dressing room. He hasn't had been linked to steroids or even brought up “sloppy seconds” in front of a group of reporters.

All we hear him talk about is the game, and all he has to say is positive. And that's all we care about. He is the greatest ambassador for the sport. Just like Gare Joyce's biography suggests, Sidney Crosby: Taking The Game By Storm, the first overall pick in the 2005 NHL draft has been a tornado of talent that has produced a squall of scoring since being in the league.

I'm not a Crosby fanatic. Gretzky is still, and always will be, the best. I don't even root for the Penguins. I don't think he is a saviour like the way the people of Pittsburgh do, since Sid saved their NHL franchise and helped get them a new arena.

However, I do think Crosby has messiah-like qualities. This is not because he has lived out my dream of partying with the Stanley Cup and Sam Roberts on my birthday. This is because he is saving the real meaning of hockey. This is because come this Winter Olympics, Crosby is going to sacrifice everything he has to unite everyone across this country. He is going to lead a passion that brings us all together.

He is going to do exactly what he believes the sole objective of the sport is.

If you disagree, maybe the Nordic combined competition will ignite your spirits.