Valentino flick a fashionable must see

Alyssa Pageot Culture January 18, 2010
Fashion has always been vital to my life in one-way or another, but it didn't completely consume me until I made the choice to enroll in fashion design. Since that day it takes up more than 50 per cent of my life. Therefore, a large quantity of my Christmas presents this year were fashion-oriented, calendars, sewing equipment, books and clothes. But, the best gift I received was one that I did not ask for: Valentino: The Last Emperor on DVD. A dear friend of mine who had seen the movie and enjoyed it, decided to buy it for me because he knew how much I would appreciate it and that I had yet to watch it. It's been named the fashion movie of the year, but it is more than that, a touching in depth documentary of two incredible men and their partnership of 50 years. 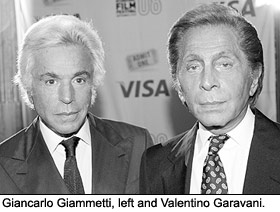 Valentino Garavani emerged into the world of fashion internationally in 1962. He became the leader of Italian couture and has a huge impact on fashion around the world. He is part of that honorary group of iconic designers whose names will never be forgotten and whose fashion houses will live on long after the founder does. The movie begins with the production and behind the scenes work of Valentino's Spring 2006 couture collection/runway show. The detail and exhausting work that goes into every little thing Valentino does is incredible, but it most certainly cannot be credited to him alone. His staff and close friends have a huge impact on what gets accomplished in the company and after watching the movie it is clear to see that he would not have made it as far as he did without his companion and business partner Giancarlo Giammetti. The two are an extraordinary pair to watch. After spending so many years together it is obvious that they know each other more than anyone else ever could and it awakens my belief in soulmates after watching their personal lives and mannerisms. Giancarlo stated that he does not believe that Valentino really understands how much work goes into every runway show, but it is clear that Valentino understands the work that goes into a garment because he is ridiculously stubborn and unwilling to compromise his visions: a true diva.

The film then begins to focus on Valentino's last big party to celebrate his 45th anniversary (which occurred July 6, 2007). Many people took this as a sign that he was soon to retire. Otherwise, why not wait five years and hold an even more lavish event for the significant milestone of 50 years? But Valentino still denied rumours of retiring. The company had been having money problems since 1998 when it was sold to HDP Corporation, who then sold it four years later in 2002 to the Marzotto group. Since then Matteo Marzotto has been financial president of the Valentino Fashion Group. Thirty per cent of the company was than purchased by private equity firm Permira for $1.1 billion. Shares were than sold by members of the Marzotto family and Permira became the largest investor in Valentino. Regardless, the anniversary party turned out to be an immense success and swarming with famous faces such as Anna Wintour, Tom Ford, Uma Thurman, Donatella Versace, Karl Lagerfeld and Giorgio Armani, just to name a few. Valentino did not let it be known at the time that it would be his last big event but looking back now he undoubtedly went out with a bang because it was one of the greatest fashion celebrations in history.

Valentino eventually announced his retirement two months after the celebration occurred. Alessandra Facchinetti (who previously had worked for Gucci, replacing Tom Ford) was appointed creative director for Valentino but after just two seasons she left the company. Maria Grazia Chiuri and Pier Paolo Piccioli who had been working with Valentino for 10 years designing accessories, were appointed as creative directors and continue to work under the Valentino name to this day.

It is an outstanding film centred on the life of a legend and for any fashion lover it is a must see and worth adding to your movie collection.