Arkells reaching for the rings

Joshua Hoffman Culture January 11, 2010
Arkells are the biggest up-and-comers in the country. So good, they are going to compete at next year's Winter Olympics. When I say “compete,” I'm referring to what lead singer Max Kerman has planned, “We are going to hang out with the athletes and, you know, challenge them to arm wrestles.”

This Hamilton-based band has earned the honours, however, to play four or five shows up on the mountains of British Columbia to entertain thousands of athletes. Kerman didn't hesitate to joke that he wouldn't mind participating in the figure skating event though, “I'm not a very good skater. I mean hockey would be awesome, but to pull off a triple sow-cow — not many guys can do that!”

Coming off an impressive, yet triple sow-cowless, rookie season, the Arkells have just wrapped up their first cross-country tour, opening for acts like The Tragically Hip and the Sam Roberts Band, while headlining their own shows. Making enough noise to wake the dead, Arkells don't disappoint bringing their blatant and boisterous debut record to the stage. 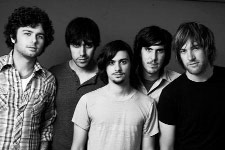 “Yeah, everyone's always feeling so energized within the band about playing these shows, especially when the turnouts keep growing. We know how fortunate it is to have people in another city to come out and sing-a-long and dance and stuff. So, it doesn't take a lot for us to get excited,” Kerman admits.

Being long-listed for the Polaris Prize this past year, the foursome's opening effort Jackson Square didn't shy away from the airwaves either. With songs like Oh, The Boss Is Coming!, The Ballad of Huge Chavez, and Pullin Punches, it was hard to turn the dial when they came on the radio. But even though they didn't take home the $50,000 winning the Polaris, Kerman humbly admits he's flattered but says those things don't matter.

“We'll take them if they give them to us but we're not in it for awards. We love playing live and writing good songs, that's all we care about.” While they have not earned any Grammy nods, Kerman says they've actually done one better. “We got nominated for like five Hammys, which are the Hamilton Music awards. In our minds a Hammy is just as big as a Grammy, being a Hamilton band. Whatever, it's the same thing to me.”

With the album a success Kernan looks back with satisfaction but thinks Jackson Square has some play left in it.

“I think the plan right now is to go down to the States and go to Europe and try and tour as much as we can and get the album out there. We've worked really hard in Canada and it's been exciting seeing it grow out but we want to do the same thing other places so we can have the opportunities to travel and see new dingy rock bars,” Kerman said, before explaining they are going to hold on to the band's batch of new material for awhile before going back into the studio. “We have been playing about four new songs on this tour and we have a whole pile of other songs ready to go. But right now it is about giving the songs on Jackson Square their due time.”

So next up, the Olympics. With fresh ears gathering from all over the world in their home country, this might be as good of an audition as any for the Arkells' next endeavour. The world is on the horizon, and the Olympic torch could spark international conversation about Canada's rookie rock band. Maybe Kernan will have to whip out the triple sow-cow — but maybe this band's powerful punch-in-the-face performances and catchy tunes will do the trick.

Fanshawe grad Brady in it for the long haul

Rawkin: Bagpipes bring new life to the Out Back!