This past week in Pasadena, California, U2 broadcast their extravagant 360 Tour live across the world via YouTube. This being the first live concert to be available front to back on the website for free.

With everyone going to the Internet for their music these days, it's surprising that no one has tried this before. Well no one in the same league as U2 anyway. It's simple and it's brilliant. But U2's bright ideas burn out after that.

It feels that while setting record attendance at the Rose Bowl and bringing the ‘Biggest Concert Ever' to living rooms around the world, the rockers from Ireland could be putting their efforts towards making a more significant difference with their latest campaign. 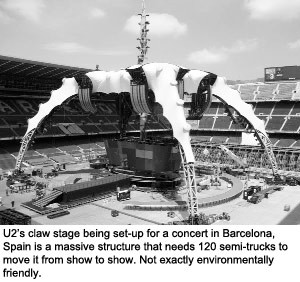 It's been reported that it costs $40 million to build the stadium stage set up, which is made of solid steel and sits at 164 feet tall. This is ‘The Claw.' It's a four legged monster that hovers over the band, with each leg supporting a sound system that would do the job for an entire arena.

One 100 plus ft. steal leg sound system: $32 million (each). Being completely deaf: Priceless.

The daily cost to run this circus, $750,000. With over 70 shows booked from now until next October, well you can do the math. For a band that cares to end poverty in developing nations and fight AIDS in Africa, their strategy is interesting to say the least.

U2 has designated certain stage close seats called the ‘Red Zone' with all proceeds from the $1,000 tickets expected to go to the Global Fund to Fight AIDS, Tuberculosis and Malaria. But with 360 not expected to break even until half way through, in a time of declining CD sales the band is most likely going to pocket every penny they can from this MONStour.

Bono, a man that lobbies politicians around the world to erase developing nation's debts and help those who are starving, doesn't look too hungry to change the world but maybe that's because he's full of bullshit.

After this tour there might not even be a world to change. Well that may be a bit extreme but it does take 120 semi-trucks to transport ‘The Claw' from show to show. This is while the four band members travel in style in their own 360 Tour jet. I don't think you need Al Gore to tell you that is not good for the environment.

Everyone knows who U2 is, yet this latest display doesn't even give you the chance to ignore them if you want. But everyone can continue ignoring the issues that are ‘so close' to Bono's heart. U2 is constantly trying to take themselves to the next level, but as they claw their way to untouched territory with new stage set ups and innovative Internet ideas, they further separate themselves from those starving in the slums of Congo and Zimbabwe. As they spend millions to make millions, millions are dying in Sudan.

Undoubtedly, Bono takes advantage of having hundreds of thousands of ears listening to his every word to say how we can change the world, and we can do it together. But really Bono should take two minutes to shut the hell up and put his money where his mouth is.

Young Galaxy doing it their way

The Dead Letters alive and kicking