A collaborative effort that finally puts the “super” in supergroup

Joshua Hoffman Culture October 19, 2009
The term, “supergroup” has been tossed around to describe already established artists who try to “blast their speakers” on the status quo by collaborating with various other talents to push the boundaries of music. In all seriousness, the only supreme thing to come out of these sorts of major musician alliances has been The Travelling Wilburys (If you know this act's lineup, enough said). That may be, however, until now. Without releasing more than a tease of tunes that run no longer than a minute each, Them Crooked Vultures have been touring the world, selling out shows, and blowing minds with their ground-breaking hard rock sound.

Kicking it off at Chicago's Metro for “The Lollapalooza Afterparty,” back in August, TCV have been showing up, and just plugging in their instruments, at festival after festival, and clubs around the world. Making surprise appearances, and opening up for acts like The Arctic Monkeys, these bad birds are creating quite the hype. With current tour dates scheduled across North America, the curiosity surrounding this act has been overwhelming, and tickets aren't sticking around for very long (The Sound Academy in Toronto sold out during its pre-sale, and tickets to the UK leg of their tour were all gone in under 12 minutes!) 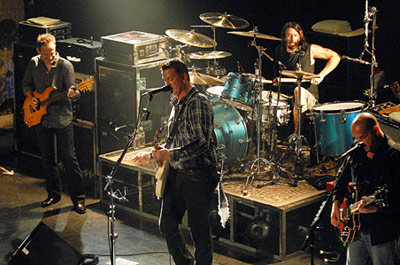 This past week, Them Crooked Vultures, brought their uncanny, unheard of, and almost unprecedented tour to The Fillmore Theatre (formerly The State Theatre) in Detroit, Michigan. No cameras, no opening band, no problem. When 8:30 p.m. hit, the lights went off, and the crowd roared. There they were - all on one stage together - Foo Fighters' frontman Dave Grohl (on drums), Queens of the Stone Age's Josh Homme (rocking the mic), and of course, Led Zeppelin's John Paul Jones indulging in a mixed bag of instruments (live rhythm guitar is filled out by Alain Johannes, also formerly of QOTSA). With a quick 80-minute set featuring a rather intoxicating 10-minute prog rock jam ending (instead of an encore), it definitely wasn't a traditional show.

One can only guess how these three came to start a band, though it may (or may not) have had something to do with the recording of the Foo Fighters' 2007 double disc, In Your Honor, on which both Jones and Homme made guest appearances. Nonetheless, this newest project is the heaviest of anything that any of the three members have previously produced.

With Grohl on drums (where he truly belongs), you get a loud quarterback carrying the sound of the staged beast that is TCV. Playing the drums as though if he stops, he will die, Grohl beats those cylinders like he has a personal vendetta against them. As for John Paul Jones, even though he is more than 20 years older than the rest of the clan, his walking bass lines certainly don't show it. Straddling comfortably between “legend” and “freak of nature” status, Jones lays down the band's backbone, provides four minute piano extros, and even whips out his key-tar (only JPJ could make the key-tar cool) at well-selected moments. His experience with one of heavy metal's most influential groups is, undoubtedly, a guiding force to TCV's mammoth sound. Homme's personality complements the band's mystique. Hitting a range of volumes throughout the band's performance, from a high-pitched soothing melody to a low demonic harmony, if you are familiar with QOTSA, you are aware of how haunting a presence Homme can have. Leading with his fiery red hair that's almost identical to the shade of his guitar, Homme looks so cool in front of his friends, that the wild noises he's producing appear easy. Together, fashioning a progressive sound that isn't afraid of anything, the music of Them Crooked Vultures will first run you over, then pull its emergency brake on the tempo, just before switching gears and thrusting you into a completely new direction, on a completely different note. With songs like Scumbag Blues, Dead End Friends, New Fang and Nobody Loves Me and Neither Do I, head banging or hips gyrating, the music of TCV will literally move you, whether you like it or not.

And that is the question: “Will people like this?” If you need to compare it to any of the three members' former bands, Them Crooked Vultures sounds the most like Queens Of The Stone Age, but…on steroids. A loud force that isn't quite like anything on the radio, their debut self-titled record is set for a late 2009 release, and is sure to receive critical acclaim. As for fans? Though TCV is truly an innovative band, their tunes may prove to be too heavy for some ears, and I think it might take a while for people to realize how amazing they really are.

The Hidden Cameras heaped with praise