Brother My Enemy's metal catching on

T.K. Dallman Culture October 12, 2009
Having individually shared the stage with bands like 54-40, The Trews, Big Wreck and I Mother Earth, London rockers Brother My Enemy are seasoned players just looking for their big break.

“We come from a collective background of many years of previous live and studio experience which I think gives us an edge over fresh young bands, and even makes our music a little more mature than most new acts,” said Chris Spiers, the group's drummer, in an e-mail sent earlier this week. 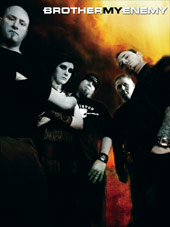 He's one of five members that make up Brother My Enemy, a seven-string guitar, heavy chugging alt metal group who will be performing at The Brunswick in St. Thomas on October 16. They're also winners of several Garageband.com awards for their song “Teach Me How To Breathe,” and more recently the FM96/Flywyng Ultimate Battle, a prize worth $10,000 in recording time. It's a great start, considering the band formed just over a year ago.

“[The awards] kind of drive home the point that we are on to something cool with this band,” mentioned Spiers. But while they do appreciate recognition for their hard work, awards are not the be-all and end-all of Brother My Enemy. Instead, he says, the band is “about creating good music that people can enjoy and share with us.”

It seems to be catching on, and though some hail alternative metal in the vain of Breaking Benjamin and Chevelle as a dying genre, Reagan Thorne, one of the band's two guitarists was quick to assure me that “things are definitely falling into place quickly for Brother My Enemy.”

But they're starting small. “We would rather sell out a smaller club and grow a buzz on the local scene than relocate to [a bigger city like Toronto],” remarked Spiers. “With London central to Toronto and Detroit, we ultimately have two playgrounds to build upon. [And] in the meantime, BME is getting great reception in London and surrounding areas.”

And while metal music tends to attract a predominantly male audience for its purely aggressive nature (even the band's name refers to the anger felt from betrayal and deceit), BME shatter norms by the inclusion of Lisa M. Bulhoes, one of the few female rockers out there. Even more rare, she's the band's second guitarist.

“[That's] true. Most female musicians are either lead singers or bass players,” she wrote. But having a feminine influence wasn't necessarily a deliberate plan of the band. “It just worked out that I happened to be available at the right time, and had the talent and dedication these guys needed to complete the BME line-up.”

Now with their first EP released and more recording on the horizon, Brother My Enemy are preparing for the long haul of “tour, tour, tour.” Their hopes for the future are meager and honest; they just want to “keep writing new material and see where all this hard work takes us.”

An admirable goal for any band. Check them out at The Brunswick in St. Thomas on October 16, or online at www.brothermyenemy.com

Akron/Family experimenting with the music