“Guitar God” King has the music going on

The Atlanta, Georgia native is not only unique because she is probably the most rocking guitar player under five feet (and a chick to boot) but you get a good look at what really makes King so unique when she's on stage. Combining her fret tapping and bass slapping technique, she sometimes has the fingers on her left hand hanging from the top of the neck instead of gripping it from below.

“[I spent] years playing guitar as a child normally and then getting bored with it and sort of going ‘what can I do differently?,'” explained King. “Always trying to make something beautiful but do it in a slightly different way than what people expect from guitar players.” 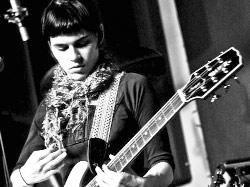 Back in May the guitar goddess, released the EP, Mexican Teenager, just more testament to how busy she has been. On top of her five albums and two EP's in the last six years, King has collaborated with Canada's Tegan and Sara and the aforementioned Foo's, joining Dave Grohl and gang on tour.

The experimental musician was even nominated for a Golden Globe for her work on Sean Penn's Into the Wild and, according to the film's website, is credited for scoring the yet to be released indie flick How I Got Lost.

Clearly this isn't enough for a goddess though.

“I feel far less prolific than my career would make it seem,” King says in all modesty. “I tend to write for projects and not just sort of be constantly writing.

“I've been touring a lot over the past years and touring is not exactly the best place for me to write.”

On her first two albums, it was just King playing guitar. She believes “there is really a glass ceiling on solo guitar music. I think I really just got driven to get out of that category. At least for a spell in my life. I'm sure I'll make solo guitar records in the future.”

She carries on with her modesty attributing her success to luck and claiming little fame, which isn't exactly right even if King disagrees. In 2006, Rolling Stone magazine named King the first ever female “Guitar God.” After admitting she sold her soul to the devil, she expressed mixed feelings about the magazine's article.

“I was like, ‘Oh my god this is the coolest thing that has ever happened,' and then I read the description and was like oh...god,” explained King. “They compared me to a cross between Eddie Van Halen and Bootsy Collins! Obviously the person that put this list together, probably has never heard anything I have ever done.”

King says she is honoured that such a large publication said nice things about her but when it really comes down to it she's just disappointed with the benefits.

“You don't get much when you are a guitar god. You don't get to transport yourself from one place to another instantly. You don't get to change people into frogs or snakes,” which apparently is something King has always wanted to do. “I want to be one of the Greek Gods, one of the evil-doers and mess around in some love affairs. But really no, I get nothing.”

Which again isn't right, kind of.

If you have the Foo Fighter's latest album, you are aware of track nine, Ballad Of The Beaconsfield Miners, a guitar interlude tribute for two Australian dudes who were trapped in a mine and survived off iPods full of Foo.

Well dueling guitars with Grohl on the song is King. An experience she describes as “so chill.”

“A lot of things that happen in the music industry are like ‘well, my manager talked to so and so' it's like a whole hoop-la but it was really [Dave] and he was a fan and so was the band.”

Before she knew it King was in L.A. and in the studio with Grohl showing her the song he wanted King to play on. “It was like making music with a friend. It was really cool.”

King continued about Grohl, admiring his endurance as a Rock Star. “[Grohl] is a machine. The amount of energy he has. It's not like he goes out on stage and gives it all and then comes backstage and collapses, he is ready to party!,” King explained about admiring Grohl's endurance as a rock star. “I've never seen anyone with so much crazy energy, it's inspiring.”

Inspiration that could maybe show up on King's next album? Atlanta's smallest guitarist announced she has new material on the way even though she is not sure what it will sound like. King said she is trying to go back with this new album but still wanting to do something simple and authentic.

Keep your eyes and ears open for this 5ft. Goddess, if you are not looking closely you might miss her.

At least YouTube King, and if this article doesn't illustrate why I asked her to marry me, maybe the video will.

Faculty member of the week