This classic action figure gets a technological upgrade, though while surrounded by action scenes, the effects and overall story line are lacking just enough to keep this film from rising at the box office.

Set in the not too distant future, where armed weaponry takes the turn toward technology; a war head is invented that releases tiny robot termites that eat their way through metal and anything that gets in their way. The United States purchases four, of course, and enlists highly trained men to escort the warheads from the factory to a government base. 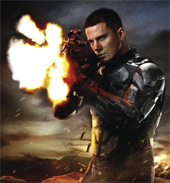 Duke (Channing Tatum) leads the men in what seems like a flawless and simple mission. However, after an ambush leaves only Duke and fellow officer Ripcord (Marlon Wayans) alive (only because of the help of an unofficial group of soldiers), it seems like there is more going on than meets the eye. Wanting in on the mission to avenge the lost comrades, Duke and Ripcord join the ranks of the best of the best, the super secret, highly trained G.I Joes.

After serious training and conditioning, it is time for the Joes to follow some leads to try and uncover those behind the ambush and subsequent threats to detonate the warheads on the innocent people of the world.

While the trailer portrayed the film to be campy and over the top, the forums were saying to not judge the film by its trailer, as it was better then portrayed; so I went in hoping for the best. However, it was just as the trailer set it out to be. While the action was good and there was plenty of it, it was often over the top and at times more laughable than awe worthy. As for the effects, there were scenes that were done impeccably, like the Eiffel Tower scene. However, it wasn't consistent. One scene in particular, when the character Destro is created, was the worst. It looked ridiculous.

As for the consistency with the action figures, I did not collect them myself, but I have been informed that while most, if not all, of the characters existed before, their back stories don't match up. Personally it didn't make a difference to me. Also, the Joes were covered head to toe with technology, helping them in their battles, which is also new. The Joes seemed to depend more on their technology then on their skills, except for Snake Eyes. This is different from the action figures but it is understandable considering the change in time since when G.I Joes were first released and the types of toys available today.

The cast did a good job portraying the famously talented and courageous Joes. Tatum (Fighting) played his usual tough guy with a heart role and while repetitive I really enjoyed his performance. He was supported by Wayans, Dennis Quaid, and Sienna Miller. Joseph Gordon-Levitt (Killshot) also starred in the film as Cobra Commander or Rex. Although he has spent most of his career doing indie films, he has proven himself to be a very talented and versatile actor. I recommend this film to anyone who likes action movies or collected G.I Joes.

Final Words: Saw it. Liked it. Accelerate yourself!